Written By: Dharmesh Shah October 30, 2012
The Classy Way To Get Media Coverage For Your Startup Written by Dharmesh Shah on October 30, 2012
The following is a guest blog post by Nicholas Holmes. Nicholas is the co-founder of MediaGraph, a public relations platform that enables small businesses to manage their own media outreach. He was formerly a journalist and an Accenture management consultant.

In my previous career as a journalist, I received hundreds of story pitches with press releases attached every day. Like so many other well-meaning journos, I'd make a valiant attempt to at least skim the first two lines of every one in a vain attempt to maintain some sort of equilibrium between the read and the unread. 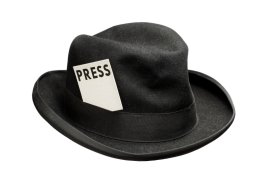 In those two lines, I (and almost all the journalists I know) made a rapid judgement on the newsworthiness of content, never spending enough time thinking about what a story could become, rather than what it was. In short, if your piece of news wasn’t 100 percent right, it would rarely get the time of day.

Savvy PR practitioners know this. The best will be in contact all the time (or at least well before they have a news story to pitch) in an attempt to figure out how to maximize the chances of something being picked up. It’s a wonder there aren’t more of them. Sadly there aren’t and 80 - 90 percent of pitches I received followed the tired format of "Hi X, Company Y is launching a product next week and we thought it would be of interest to publication Z."

Clearly showing that you understand that a journalist doesn't just exist to publicize you is one of the fastest routes to his or her heart. It’s literally the difference between drunkenly hitting on someone in a club and taking him/her on multiple dates to the restaurant you can’t afford. Hell, you'd be unlikely to start a sales pitch without knowing your customer, or begin discussions with an investor without finding out exactly what they were interested in -- so why treat the media differently?

The closest relationships journalists build are with people who can provide long-term value to them by offering something that isn't just self-promotion. Conversely, these tend to be the names you see cropping up again and again in the media.

So instead of a product pitch, why not offer something else if you’re trying to use the media to get the word out about your startup? The following list should get you started:

Having a network of people to offer opinion and analysis is critical for most journalists and it's a great way of getting your name out there, even when you don't have any news. So make sure your media contacts know who you are and what you're qualified to talk about by introducing yourself with a short biography and an offer to help.

Most journalism is about distilling complex topics into chunks that people understand, which means journalists need to be knowledgable about a lot, and always stay up-to-date. If you're an expert, or have access to experts, you can offer to spend some time highlighting trends or recent developments in your area to help journalists do their job better.

Perhaps it's a cliche, but one of the best ways to curry favor is to open doors. Does your business have an investor, a board member or a founder who's in demand? Offering an introduction to the right person can help ensure that you're remembered for the right reasons, and it doesn’t have to be just a cynical gesture. Connect two people who will benefit from knowing each other and you’ve done them both a good turn.

Many companies I've come across sit on piles of newsworthy data they've never considered using. It could be information interesting to everybody or just to a niche audience, but take a look at some other examples of companies doing this and see if you might do something similar. Are you collecting data you can aggregate about your users that will be of interest to a consumer publication, such as their top tracks, movies or TV shows? Do you have access to collated information on Twitter that a journalist could use to prove a point? Or does your business measure something nobody else does?


Insights into the business

TechCrunch ran a surprisingly popular series (http://techcrunch.com/tag/tc-cribs/) some years back which took a look around startup offices in the style of MTV Cribs -- a perhaps extreme example of how day-to-day business operations can be interesting. Think about whether your organization does anything particularly noteworthy operationally which could give a journalist some inspiration. Are there unique management styles or internal practices?

Too simple? Never! If you can meet conveniently, meeting a journalist face to face is the best way to make sure that you'll be remembered as more than just an email address. It also signals that you’re willing to invest serious time on getting to know this person, which will be appreciated - and who knows where you’ll both end up in the future?

Don't Make Raising Angel Funding Your Plan B
guest April 16, 2012
The following is a guest post by Chris Sheehan. Chris is a seed stage VC and angel investor at CommonAngels. You can follow him on Twitter at @c_sheehan and his blog Early Stage…
Read Post
3 Biggest Mistakes When Choosing a Cofounder
guest April 18, 2013
After spending a significant portion of the last couple of years talking and collaborating with countless entrepreneurs (through FounderDating) a few clear themes have emerged around…
Read Post
Subscribe