Startup Insights From The Grateful Dead

The following is a guest post by Brian Halligan, my co-founder at HubSpot.  Brian recently released a new book titled “Marketing Lessons From The Grateful Dead”. The book is a brilliant condensation of some strategic insights that should be useful to startups.  Brian is currently the co-author of 2 of the top 10 marketing books on Amazon (the other one is “Inbound Marketing”).

The following article is excerpted from one of the chapters of the book.

Before the Internet, bands promoted their new albums by scheduling tours across the U.S. and around the world. Fans paid huge bucks to attend sold-out shows where they were treated to pyrotechnics, light shows, and of course the music. Concerts were the same every night and included the bands’ “best of” songs, with cuts from the new album mixed throughout the set. The goal of these concert tours was to sell as many records as possible to ensure your album went gold, platinum or multiplatinum. 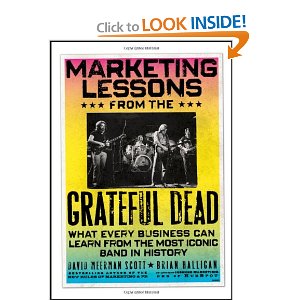 Fans bought albums at their local record store where they would find the list of top albums for that week taped to the wall next to the cash register. For an album to go to gold in 1975, a band had to sell 500,000 of them and hit $1 million dollars in sales. To be awarded the coveted platinum certification, bands had to sell 1 million albums and hit the $2 million dollar sales mark.

Doing concert tours to promote these moneymaking albums was the fundamental business model for bands, the record labels and sundry hangers on. The Grateful Dead turned this business model on its ear: rather than focus on selling albums like other bands, they focused on generating revenue from live concerts, and in doing so created a fan “experience” that was unlike any other.  Because the concert tours themselves were the main source of revenue, the Grateful Dead ran their concerts in a very different way from other bands. For example, each show had a unique set of songs and each song was played in a unique way, giving fans a strong incentive to see the show for several nights in a row (or weeks, months or years) because every night you were treated to a different musical experience. This is the exact opposite approach taken by other bands.

Since the concert tour was at the heart of their business model, the Grateful Dead didn’t tour periodically to promote an album; with few exceptions, they were permanently on tour. The Grateful Dead invested heavily in their light show and sound systems, both of which were the best in industry, and in doing made the musical experience much more powerful for their fans. Due to these factors and others, the Grateful Dead developed a following of people who would see show after show. These followers became part of the concert experience, especially as you waded through them in the parking lot where you were exposed to tasty food such as veggie burritos, all sorts of exotic drugs, unique clothing, and all the other crazy stuff that went along with a Dead tour. By changing that one fundamental assumption in a typical band’s business model, the Grateful Dead created a cascading effect of benefits for themselves and their fans. Imagine for a moment if the Grateful Dead had put themselves in the care of a manager focused on selling records and increasing the profits of a record company. If they had conformed to “industry best practices,” the Grateful Dead might be one of the thousands of bands on the dead heap of music history. The concert-as-business-model worked, and the Dead created a passionate fan base that became an underground cult that catapulted the Grateful Dead into the rock and roll stratosphere: the fan base grew from thousands to hundreds of thousands to millions with the Grateful Dead selling out shows around the globe.

It’s much easier to follow what other companies are doing and mimic their business model than it is to innovate. Don’t do it! Watch your competition, but avoid the temptation to follow them with every fiber of your soul.  Today’s big winners typically win because of unique business model assumptions, rather than some new technology or complicated product improvements. A few common examples include Netflix (versus Blockbuster), Zipcar (versus Hertz), eBay (versus yard sale), Google AdWords (versus Yahoo), iPod + iTunes (versus MP3 + downloading), Southwest Airlines (versus driving a long way), and Walmart (versus the country store). Like the Grateful Dead, these companies turned the core assumption of how their industry works on its head to create an unlevel playing field for themselves. Their rejection of core assumptions in their industry allowed them to really stand out from their competition and create a cascade of benefits for their customers.

The Grateful Dead teaches us that business model innovation is just as important, if not more so, than product innovation.

An exclusive, invitation-only online destination, Rue La La is a website where members can purchase high-end fashion goods at discounted prices. What’s different about Rue La La from a TJ Maxx or other discount retailers is its business model. Rather than offer last year’s items that didn’t sell in the stores at heavily discounted prices, Rue La La developed partnerships with designers and by working closely with them, offers current merchandise and one-of-a-kind items at discounted prices – items which can only be purchased during limited time periods.  Here’s how it works: Each day, Rue La La features a designer boutique, say Villeroy & Boch or St. John, that opens at 11:00 AM Eastern and remains open for 48 hours or until merchandise sells out – with a blinking clock counting down the time. Because merchandise can sell out in a matter of minutes, members often set calendar reminders so that they can be at their computers a few minutes before 11:00 AM. The company sends out email reminders a few days in advance that let people know which designers will be featured on the site.

Since its inception in April 2008, Rue La La has built a passionate fan base of 1.6 million members using viral methods. To become a member, you must receive an invitation from another member. Once a member extends an invitation, he/she receives a $10 credit when each friend places their first order, with no limit placed on the number of credits one can receive. Credits can then be used against any boutique purchase.

You would think that the limited availability of fashion items would frustrate people and turn them away. Instead, the opposite is true: Limited availability of items reduces over-exposure of brand partners and their merchandise as well as customer fatigue at seeing the same brand or fashion items over and over. It also creates a sense of urgency – if shoppers don’t buy something immediately, they’ll lose out and will kick themselves for days after for missing a good deal. This is different from the typical shopping experience where if you’re not sure about an item you can go home and “think about it,” which usually means a no sale for the retailer as your ardor cools and you realize you don’t really “need” the item.

Rue La La helps people make fast purchases with its “Quick! Buy It” feature: a member enters her credit card number and billing / shipping information on the account settings page, and when shopping can click the “Quick! Buy It” button, eliminating clicks for hot purchases.  Members can even shop via smart phone – making it easy to purchase items while on the run. If a member has a problem with any purchase, she can Tweet Rue La La’s Concierge, who responds immediately.

Instead of competing with retail discounters or high-end department stores, Rue La La has created an innovative business model that targets a distinctive demographic. With passionate fans around the world, the company grew from around $25 million in sales in 2008 to $28 million in the 3rd quarter alone for 2009. Their innovative business model “paid off” as the company was purchased by GSI Commerce, Inc. in early 2010 for $350 million.

Products that are highly differentiated can still win today, but it’s much harder to win if your business model is the same as your competitors’. Your job is to do research about your industry in order to build a killer business model. You want to break free from the competitive landscape and create a cascade of unique benefits for your customers.

In addition to thinking about your industry competitors, what are the “alternatives” to your product? Can you find ways to erase the traditional “boundaries” of your industry by incorporating or subsuming some of the alternatives? Southwest Airlines, for example didn’t compete with other airlines, they competed with a long car drive.

What new technology is emerging that might enable you to upset your industry’s apple cart? Could the Internet be a new distribution channel? Could an iPad application catapult you past the competition? Could you use Amazon’s mechanical turk system (an online arena that connects those who have relatively small tasks with people who can perform them) to dramatically lower costs or deliver new value?

Are there societal changes happening that you might take advantage of in your industry, such as empty nesters moving back into cities, more people working from home, a shift to outsourcing to rural America than overseas, or increased interest in low carbon footprint lifestyles for companies and families, etc.?

Do you have someone who’s really smart from outside your industry that you can ask to help you with this?  The problem with creating a unique business model in an industry you grew up in is that you naturally get bogged down in the industry assumptions you’re trying to break.

If you liked this article, you'd also likely enjoy a free upcoming webinar titled "How To Market Your Business Like The Most Iconic Band In History".  You should also buy the book.  It's a quick, easy read.  You'll like it even if you're not a Deadhead (I'm not).

So, what do you think?  Any other examples of companies that you think did this particularly well?

7 Lessons On Startup Funding From a Research Scientist
guest January 16, 2012
The following is a guest post by Ty Danco. Ty is an angel investor and startup mentor. Read more of his thoughts at tydanco.com. My wife isn't in business, but she is wise in the way…
Read Post
31 Short Highlights From "Disciplined Entrepreneurship"
book July 23, 2013
As many of you may know, MIT is near and dear to my heart. As my co-founder, Brian Halligan likes to say, “HubSpot was born out of the loins of MIT”.  As such, I like to stay in touch…
Read Post
Subscribe