Why I'm Investing $1 Million In BitClout

I’ve decided I’m going to invest $1 million in BitClout the blockchain-based, crypto-currency powered social network that is all the rage (at least within some circles). 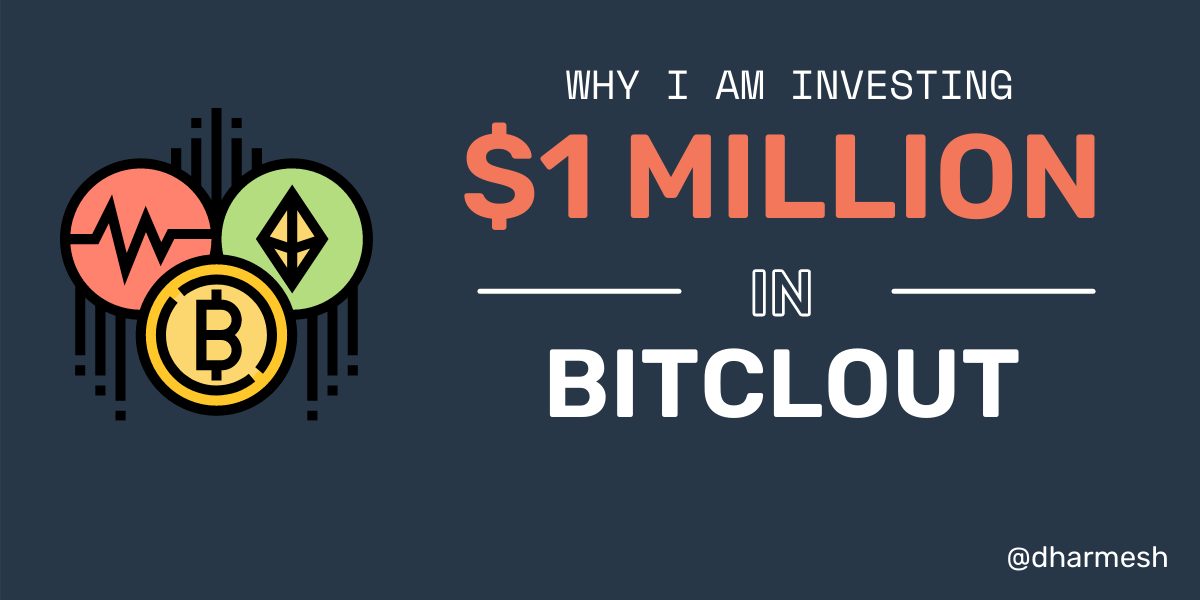 If you don’t know what BitClout is, I think my earlier post “What’s BitClout?” is a decent overview.

OK, back to that million dollar thing. To be clear, I’m not buying shares in BitClout (the company). I have it on really good faith that one can’t really do that, and nobody has done that.

Instead of investing in the traditional sense, I’m going to do a combination of the following:


Back to the million dollars. Why have I decided to invest such a large amount (higher than my usual)?

Before I answer, a super-important note: I am not an investment advisor and this is not financial advice. I am not (remotely) suggesting you should do what I did.

First, I’ve been a believer in BitClout from the early days. You know, like waaay back in March. I just think the potential for a platform like BitClout is immense. Will it be the one that actually achieves that potential? I don’t know, but it’s the best implementation I know of a blockchain powered, crypto-based social network.

As evidence, one need only look at the momentum.

I also love that BitClout is not just open source -- but also open data. They've released all the code, and if you so chose, you could run your own node and get access to all the data on the chain.

Further, I like how the project team is thoughtful around environmental impact. Just hours ago, it was announced that a recent BitClout update reduces the power consumption by a factor of 10.

I am proud to announce that the dev community has committed to moving to
a zero-waste consensus mechanism, and that it is taking a major step in
that direction with a new update.

Also, one of the big issues I had with BitClout was how hard it was to actually join and engage. To do that, you needed to own BitCoin and transfer some of that coin into BitClout.com in order to do anything. That's really high friction. Recently, they've removed that friction so that anyone can join BitClout.com without needing to own BitCoin (or even know what it is).

Finally, it’s partly because the first time I got really excited about the blockchain and crypto-currencies, I invested in a company called Coinbase. And, because I like trying out the products of the companies I invest in, I used Coinbase to buy some BitCoin. That was back in 2015. Coinbase went public earlier this year (2021) and currently has a market cap of over $40 billion.

Over 15 years of investing in over 80+ startups/projects, I've learned to trust my instincts and as long as one acts within ones tolerance for risk.

The hit you take from many failures is often overshadowed by the handful of successes that turn out to be massive outcomes.

Hope to see you there and hear your thoughts.

The Classy Way To Get Media Coverage For Your Startup
guest October 30, 2012
The following is a guest blog post by Nicholas Holmes. Nicholas is the co-founder of MediaGraph, a public relations platform that enables small businesses to manage their own media…
Read Post
Getting Crunched, Mashed Or Beaten Is Not A Launch Strategy
guest March 19, 2013
This is a guest post by Alex Turnbull.  Alex is a serial SaaS entrepreneur and the CEO of Groove, a customer support software platform for startups and small businesses.  Alex was…
Read Post
Subscribe