The Big List: The Best and Worst Startup Stuff In 2011

The following is a guest post by Ty Danco.  Ty is an angel investor and startup mentor. Read more of his thoughts at tydanco.com.  Or, check out his recent article "What To Do If You Don't Have An Idea"

It's time to review the past year, so without apology for personal taste, here's my list of the best (and a few of the worst) of 2011.

I keep a loaded Kindle copy of this book on my iPad, and I'm constantly showing it to startups raising money. The money chapter: When the Dog Catches the Bus: Making the Pick and Doing the Deal tells you what YOU should be checking out about VCs.

The Lean Startup: How Today's Entrepreneurs Use Continuous Innovation to Create Radically Successful Businesses, by Eric Ries. Had to rethink my whole approach to my startup after reading this. And I'm going to re-read it again soon.

Venture Deals: Be Smarter than Your Lawyer and Your Venture Capitalist, by Brad Feld and Jason Mendelson. A little dry, but will save you a ton of headaches.

Honorary Runners-Up (read by me this year, but written pre-2011):

Inbound Marketing, by Brian Halligan and OnStartups.com's own Dharmesh Shah. Simply put, a seminal book that gets you traffic.

Pitching Hacks from Naval and Nivi of AngelList.

If James Brown was the hardest working man in music, Andrew Warner must be the same in startup journalism. He cranks several hundred of interviews a year, so you can't expect every show to be pure gold, but he's produced more good ones than any three other people combined in 2011. A big differentiator: he spends a lot of time looking at failures as well as the easy success stories. You can search through transcripts quickly to see if you want to download the interview, either in audio or video modes. A few favorite interviews from the last half 2011: Joel Spolsky of Trello and Stack Exchange; Sarah Prevette of Sprouter talking about rising from the dead; Eric Ries on Lean Startups; Naval Ravikant on AngelList; David Friend of Carbonite; and for me, the one that hit closest to home, Harley Finkelstein of Shopify talking about biz dev. 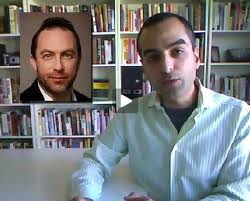 This Week in Startups, with Jason Calacanis. Jason remains the master entertainer, and he invented the startup webcast genre. You either love him or hate him, but believe me, you'll have an opinion. Cranking out 2 shows a week.

While Founder Dialogues features lengthy, in-depth interviews, and Founder Stories is cut into smaller segments, the shows are similar: Eric Paley and Chris Dixon are both VC partners at Founder Collective, both have started and sold multiple companies, and both host shows featuring great guests.

Best Intervew Podcast/Webcast Series with Investors: Mark Suster's This Week in Venture Capital. It's hard to pigeonhole this showMark's guests include both entrepreneurs and investors, but, like the sister show This Week in Startups, he gives a lot of advice on how to work with VCs. I tend to prefer his earliest shows, which featured more VCs and less entrepreneurs, but regardless there's something to be learned every time.

Upset pick for Runner-Up: The Frank Peters Show Frank's audiocast is not aimed at entrepreneurs, but rather to his fellow angel investors. He covers the nuts and bolts topics that no one else does, such as best practices for angel due diligence, and different techniques to value companies. (Disclaimer: I've been on his show twice, including this time in 2011.) A good example of Frank's work: his 4 part series All About Angel Investing. If you're looking to hunt down angel money, you should understand your prey. The best way to understand angels other than sitting in on an angel group is listening to a few of his shows, although entrepreneurs can skip the international shows or the stray episodes devoted to cycling.

Best Startup Blog: This, the most hotly contested award goes to Both Sides of the Table by Mark Suster. OnStartups already tracks the most-read startup blogs, and you should check them out. Many are great. So why did BothSides get the nod? Well, in sports, not only do you have to perform day-in, day-out during the regular season, but you need to raise your game in the playoff. And my favorite blogpost in the last week of December is this one on profitability, so Suster takes the prize--but he cranked out many equally good in the regular season throughout 2011.

David Skok of Matrix Partners' For Entrepreneurs. Every piece is gospel.

I go for quality, not quantity. All three write fewer, but deeper, articles. Funny how almost all of the best VCs started out as entrepreneurs, by the way.

For sheer density of learning, the verdict was already delivered by early January: Tom Eisenmann of HBS posting his startup curriculum for his coming class.

A tie between this postmortem by Justin Hall about Gamelayers, and

Rand Fishkin on how a funding round got screwed up.

Runners-up: Jason Baptiste talking about how to kill it on DemoDay (which he did.)

Best blog post on an unknown backstory goes to Lee Hower's post on raising Series A for LinkedIn in 2003.

And from the personal side, my favorite blogpost I co-wrote was:

Raising Money On AngelList: 21 Tips From Two Active Angels which was co-written with Dharmesh. That post received more views in 3 days than the other 49 posts (including the companion piece on AngelList hacks for angel investors) I wrote on my own blog for the whole year. You gotta hand it to him, Dharmesh knows how to get those inbound eyeballs.

Best Communication from a Startup to its Investors: From Objective Logistics as described in this blog post. I kick myself for not investing in these guys. Talk about the right attitude.

, for coming up with the HackStars program. It sticks together massively talented hackers who want into a great startup with the killer companies that make it into TechStars. The result: a serious increase in global startup mojo.

500 Startups, for providing Designer in Residence help. Almost all of the companies accepted already have a hacker and a hustler onboard, but not all of them have (although everyone needs) some serious design. Dave McClure gives UI, UX, and beautiful design its proper due, but having not just great mentors, but trained staff in design gives a big boost to his companies.

This feels like ancient history now (it happened in January 2011), but Y-Combinator, the big Daddy of them all, wasn't resting on its laurels when it announced that Yuri Milner and SV Angel were combining to offer every YC company a $150k uncapped, no-discount convertible note. Angels and VCs gasped, but it was great for the startups on the receiving end.

Runners-up: Thomas Korte's AngelPad, TechStars and 500 Startups for following up with similar deals. Like Y-Combinator, the original AngelPad funding came from 2 entities. TechStars spread it out wider amongst its network of VCs. Both firms were reacting to Y-Combinator, (hell, every accelerator is a reaction to Y-Combinator), but both quickly reacted and recognized the merits of the program. Lessons to startups: never be afraid to copy a good idea.

Funniest Twitter Feed in 2001: @fakedavetisch. He was only active for two days, but what a great two days!

Best business card execution: Any business card from moo.com that has a face with it. If you want to make a solid impression, you should consider these heavy, slightly different-sized, super high quality cards.

Runner-Up: Jeff Clavier's business card has a wordcloud that totally describes the types of companies he's looking for. It's a perfect summary of his investment interests on a tiny card.

Best business card app: CardMunch. With one iPhone snapshot, get all data entered into your phone and get connected via LinkedIn. (Also, my favorite angel investment of 2010 and the fastest exit I'll ever have.) Thank you Manu, Bowei, and team.

Best present for an Entrepreneur:

A T-Shirt or Poster from Fake Grimlock.

Best Bank for Working with Startups:

Runnerup: Nobody. Almost every startup I've invested in (plus the one I'm in now) use SVB.

I pitch my company with it, entrepreneurs pitch me on it, I talk business on it nearly every day. It saves time, money, everything. And you can archive and edit it. Runnerup for telemeetings: GoToMeeting. Never fails.

Best big push by a city to build a startup ecosystem: Montreal.

From very little in 2009, the startup tribe there has launched a new incubator last year(FounderFuel), gotten big institutional and government support from the province to create funds to match angel investments and subsidize programmers, built the largest angel group in Canada soon to be one of the largest in North America (AngesQuebec), hosted a successful first international startup festival, pulled off a successful startup competition, and created a vibrant co-working space (Notman House). And it keeps on going.

And now for the flipside:

Arrington and Calacanis. You're both rich, you're both successes, you don't need to piss all over each other. Guys, work it out and play nice, or even ignore each other. Just leave us out of it.

Comparing Silicon Valley to anywhere else. OK, we know it's great there. Yes, it is still on top. Yes, you can build a great business anywhere. Next.

Runners-Up: We are in a tech bubble.

Worst Upgrade since Windows Vista: iOS 5 on my formerly trusty iPhone 3GS. Buggy, crashes, mysterious data losses, I could go on. I promise from now on to wait to hear others' stories before installing updates.

Worst startup launch viewed from afar: Color.com. But don't ask me about it, ask the Scobleizer, who also wins a related Best Rant for his review of their launch.

Runner-up: Procrastinating by reading (or writing) blogs. Excuse me, I gotta get back to work.

Who did I miss?  Anyone you think deserves a shout-out (or a call-out) for being the best or worst in 2011?  Please leave a comment.

MIT Startup Bootcamp 2011: Notes and Musings
guest September 26, 2011
This past weekend was the 3rd annual MIT Startup Bootcamp. It's one of favorite startup events in the Boston area (I spoke at the first one in 2009. Video of my talk available). I…
Read Post
5 Tips For Choosing The Best Domain Name For Your Startup
guestpost April 5, 2021
The following is a guest post by Joe Uddeme the founder of Name Experts. Joe started the company 12 years ago and specializes in complex domain, purchases and sales. I’m a client of…
Read Post
Subscribe