The Power of Focus And The Peril Of Myopia

I'm a big fan of focus. I'm such a big fan of it, I try to apply it to as many things as possible. [just kidding]

It's really, really hard to argue against focus. Who doesn't like focus? Who would contest focus? Focus is like motherhood and Apple (the company). I honestly have no issue with focus. I see the value in it every time I do it. My problem is that I also see value sometimes when I don't focus. The decision to focus is not hard. The hard part is deciding what to focus on and what level of focus I'm thinking about.

Let me elaborate by using Apple. Steve Jobs has said a lot about focus. Rumor has it the most important lesson Jobs passed along to Tim Cook (the new CEO of Apple) was “focus is key”.

Way back when, Jobs returned to the company he founded, he observed that the team was working on too many different things with a troubling lack of clarity. So, he simplified. He drew what was later revealed (at Macworld 1998) to be the simple 4 quadrant product matrix that is shown below. Two types of users: consumers and professionals. Two types of use cases: portable and desktop. This effectively reduced things down to just 4 products. It was a great demonstration of focus (and also the power of clarity of vision). 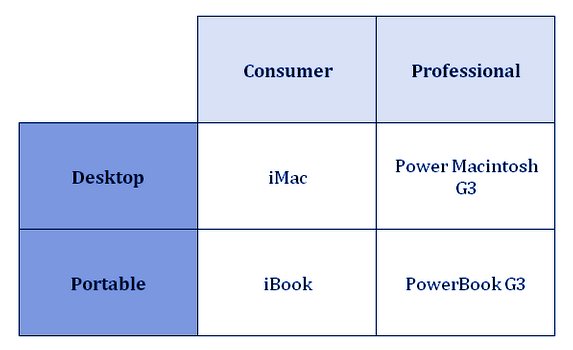 The iPod: Brilliant — But Was It About Focus?

Now, after this big, bold move towards focus, Jobs made two huge decisions that would change the course of the company dramatically.

The first was the iPod. Apple was primarily a computer company. Their customers were people that wanted/needed computers. They sold a fair number of them. They were really good at making them. Some could argue that they were far ahead of the competition (and those people would be right). At the time, one would think: Hey, the focused thing to do is to figure out a way to exploit their strength at building computers and figure out how to take over the world. It's not that there weren't enough people to sell computers to — it's that not enough of those people were buying computers from Apple.

But, instead of focusing on their core, Apple decided to build an MP3 (music) player — the iPod. Sure, there's a computer chip in there somewhere. And sure, there's some operating software involved. And sure, they had the opportunity to make it aesthetically pleasing and highly functional, thereby playing to their strengths. But, it was a music player — arguably, relatively far from their core and not a very “focused” strategy. And, Apple didn't stop at just building the device. Oh no. Not only did Apple decide to build a music player, they also decided to build a music service (iTunes). And, not just build the service, but then go out and strike deals with the content companies to get music into the service. Notice now how far we have strayed from Apple's core “focus”. What's important to recognize is that if Apple hadn't done all three of those things simultaneously (the iPod device, the iTunes service and the content partnerships), the iPod would likely not have succeeded. And, if the iPod hadn't succeeded, Apple might not have succeeded to the degree that it did.

After that, there was the iPhone — with some similarities to the iPod — but another radical shift into a different industry with different dynamics (they had to go strike a deal with a phone carrier). Once again, you could argue it either way: You could say that this was a relatively “focused” play, given the success of the iPod. And, instead of building their own mobile phone carrier, they partnered with an existing one. Or, you could say they “drifted” into the smart phone market. What you can't argue though is the brilliant success of the products. Below is a fascinating chart that shows the percentage revenue by product line for both Microsoft and Apple. Notice that for Microsoft, things are pretty consistent over the years. But for Apple, the story is completely different. Apple now makes billions of dollars on new products (iPhone, iPad). I don't know about focus, but how do you like them Apples? 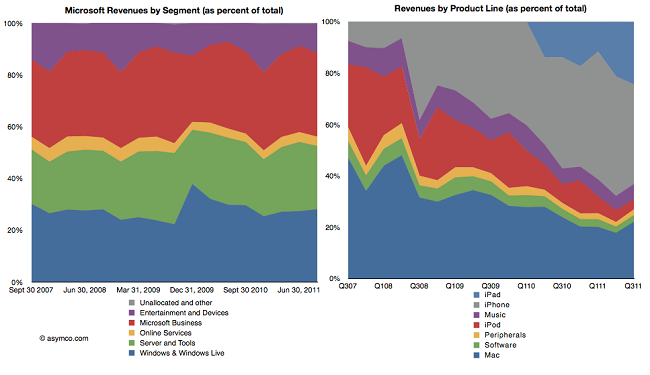 A Fine Line Between Focus and Myopia

So, here's my point: Talking about focus is useless unless you consider the level of abstraction you're talking about. If you squint just right, any activity you're looking at seems de-focused. In the iPod example above, I could argue that Apple showed considerable restraint and focus by not going out and building a Hollywood production studio and creating content. Or, I could argue the flip-side and say they lost focus from their core.

I agree that focus is about saying no. But that's not all of it. By saying no repeatedly, what you're buying yourself is the ability to say yes to something much, much better. You're not freeing up resources just to hoard them away. You're freeing them up so you can apply them better — either by saying “yes” to something new or doubling-down on bets you've already made. So, the benefit of saying no to a bunch of wrong things is only realized when you find a way to say yes to the right thing. Important note: I'm primarily talking here about high-level company strategy. If we were talking about focus as it applies to product management, saying “no” to new features has intrinsic value by just keeping things simple.

Now, lets talk a bit about myopia (which is when things that are far away look out of focus). Often, focus is centered around now — not visionary things going out into the future. But, being too focused on what's working right now and not being mindful about where the market is headed and what customers will want/need tomorrow can be fatal. This is the classic Innovator's Dilemma (one of my favorite business books of all time). So, there's a fine line between focus and myopia. Finding the right balance between focusing on what's working now and looking towards the future is tricky — and critically important.

Finding the balance between focus and long-term vision gets harder as the organization grows. In the early days of a startup, the right answer is almost always maniacal focus. Resources are limited, and the product is likely innovative already. But, as you grow, you have more resources and the pool of possible options grows considerably. This is compounded by the fact that your existing product may be falling behind and innovation becomes necessary. This is when the team starts having animated debates about whether you should focus on the core business and making your existing customers happier with your existing offering — or whether you should defocus on the core — and spend some calories looking towards the future. The answer is almost never, um, clear — and it's almost never binary. It's somewhere in between.

Tips On Balancing Focus and Forward-Thinking

Here are some simple (but not easy) tips on deciding when to focus:

1. When in doubt, focus. Your default position should be to focus more, not less. The benefits of focus are non-linear — sometimes exponential. Even a modest improvement in focus can often reap massive rewards.

3. If you're considering building new products for a new market, think long and hard. This is frought with peril. Either focus on your current market, or on your current product.

4. Try to come up with a simple way so that some of your energy/resources are always spent looking forward (instead of remaining focused). If you don't make this deliberate effort, the “we should be more focused” argument will almost always win, and its not always going to be the right answer. Build a culture of innovation that can function alongside a culture of execution.

More examples of Focus vs. The Future

Beyond Apple, here are a few other examples worth considering:

Amazon: Started out selling books online.  Did a relatively focused expansion into selling almost everything online.  Then, BAM! got into the cloud computing market with Amazon Web Services (AWS)

37signals:  Jason and DHH at 37signals rightfully get a lot of credit for articulating the benefits of staying focused and keeping things simple.  Yet, they didn't stop at Basecamp (project management).  They expanded into Highrise (CRM) and Campfire (group chat).

HubSpot (my company):  When HubSpot started, we set out to build a suite of marketing applications (including content management, SEO tools, social media, blogging, marketing analytics).  Later, we added email marketing, lead nurturing and other marketing automation features.  Now, HubSpot has the industry's first comprehensive marketing platform -- including a broad suite of applications, an app marketplace and a services marketplace -- all under one roof.  That's a lot of stuff.  And, uderstandably, we debate the topic of focus all the time.

Focus is an exceptionally powerful concept. But, to use it as a platitude (“we need to be more focused”) misses the larger point. There is no doubt you should be focused. More startups die from idea gluttony than starvation. But, deciding how much to focus — and on what, is a nuanced decision. History is replete with examples of companies that were too focused, to the point of myopia — and didn't see the future coming.

What do you think? How do you balance focus and forward-thinking?

Cult of Product: Marketing Isn't Just For Losers Who Pay For Sex
marketing November 30, 2011
The following is a guest post by Mike Troiano. Mike is a former New York ad man turned venture-funded entrepreneur, now a Principal at Boston-based Holland-Mark.  You can follow him…
Read Post
12 Terrible (But Hilarious) Places To Work [slides]
humor April 22, 2013
After the week we've had in Boston this week, I found it hard to focus on any overly heavy work this weekend. So, instead, I created the slide deck below.  This is unlike the prior…
Read Post
Subscribe