Several years ago, I met with Noam Wasserman who had recently joined Harvard Business School as a professor.  I initially came across Noam because he was doing some fascinating research on startups -- particularly in the arena of founder relationships.  When I met him for lunch, he brought up some of the toughest issues I've ever encountered in my entrepreneurial career: Should you start a company with a close friend or family-member?  Is it wise to divide equity in the startup equally among the founders?  If you had to pick, do you want the cash (get rich) or the control (be queen/king)?  What about your co-founders?  Deep, deep, topics. 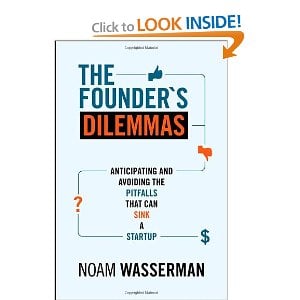 I've seen too many startups flounder and fail because of co-founder conflict.  Everyone starts off with the best intentions -- and then things start unraveling.  In many of these cases, the conflict could have been avoided -- or at least surfaced sooner, if the founders had confronted some of the potential issues and asked each other the hard questions early-on.

I've written about this topic before in "Important Questions Startup Co-Founders Should Ask Each Other".  There are only two times when lack of clarity and understanding between founders becomes a problem for a startup: when things are going well and when things aren't going well.

So, back to Noam.  He's taken the result of his years of research and conversations with founders and created what I think is the definitive book on the topic: "Founder's Dilemmas".  If you are a founder or thinking about becoming one, you should read this book.  I agree with most of what Noam says in the book.  Howver, it doesn't matter whether I agree with it or not, unlike me, Noam's actually collected data.

Below are some quick tips and stats from the book, made ready for convenient tweeting.

Tips and Insights From The Founder's Dilemmas

1) In 73% of founder-CEO replacements, the founder was fired rather than voluntarily stepping down. [tweet]

2) Founders feel like Lewis and Clark: Rough idea of where to go, but don't see a clear road ahead or upcoming pitfalls. [tweet]

3) Founding-team turnover increases dramatically when the startup raises its first round of financing. [tweet]

4) Unfortunate but true: If entrepreneurship is a battle, most casualties stem from friendly fire or self-inflicted wounds [tweet]

5) The chances of founder-CEO succession rise with each new round of financing. [tweet]

6) 65% of startups fail due to problems within the management team. [tweet]

7) Feel like a "people decision" is a no-brainer? You may be in for a nasty surprise later on. Decide rather than default. [tweet]

8) A dirty little secret of entrep: Many decisions along the journey push a Rich-and-King outcome further out of reach. [tweet]

9) Each additional social relationship within the founding team increases the likelihood of cofounder departure by 30%. [tweet]

10) Friend/family cofounders are often the least likely to tackle the elephants in the room (Relationships, Roles, Rewards) [tweet]

12) After a 6-month honeymoon period, teams with prior social relationships are the least stable. [tweet]

13) Founders often fail to realize when they are about to make a fateful decision. [tweet]

14) Examine the motivations of your potential cofounder to see if they are compatible with your own motivations. [tweet]

15) Motivational compatibility does not guarantee success, but incompatibility is asking for trouble. [tweet]

17) Is pivoting a possibility? So why do more than 50% of teams split equity without allowing for adjustments? [tweet]

18) 73% of teams split equity within a month of founding: amazing given the big uncertainties they face. [tweet]

19) The Founder Discount: A labor of love can become a trap in which you're paid less than an equivalent non-founder. [tweet]

20) Within each of the 3Rs (Relationships, Roles, Rewards), the most common choices are often the most fraught with peril. [tweet]

21) The trial by fire of founding a startup often burns a team rather than forging a stronger team. [tweet]

24) A founder-CEO's success at leading a fast-growing startup can accelerate his or her own obsolescence and replacement. [tweet]

26) Firing yourself as founder-CEO enables you to remain more involved with your startup after you're replaced. [tweet]

Two quick notes: The links to the book are affiliate links.  I donate all money made from such links to non-profits (I'd rather a worthy cause get the ~5% than Amazon keep it).

So, what do you think?  Have you run into any tough founder issues yet?  How did you go about resolving them? What issues are you struggling with right now?

Startup Insights From Paul English, Co-Founder of Kayak
strategy May 10, 2010
I’m just wrapping up several weeks of attending conferences across both coasts.  Of the ones I have been to recently, the Nantucket Conference has been my favorite.  A great group of…
Read Post
A Tech Founder's Guide To Picking A Non-Tech Founder
guest December 18, 2013
There are many articles and blogs claiming to have THE list of things to do to find the perfect technical cofounder - as if it’s that easy to find a cofounder in general. From my…
Read Post
Subscribe