Startup Gamification Lessons From a Kindergartner

The following is a guest post by Mads Srinivasan. Mads is a co-founder of Neemware, a mobile customer engagement company. He blogs here and tweets as @mitmads.

During super bowl week, during a short drive, my kindergarten son was trying to talk to me about what they did in their class that day. He was muttering words like - “Welker, 83, 400 points, fruits, vegetables”. At the same time a friend was trying to reach me over phone, so I couldn’t concentrate on what he was saying. Once we reached home I asked him to repeat the story.

This is what I gathered talking to my son. In order to make the kids bring healthy food to class his class teacher had come up with a simple game. (Yes. ‘gamification’ is everywhere). According to the game, the class (as a group) should achieve 400 points by bringing fruits and vegetables for snacks. For every serving of a fruit or a vegetable a student brings, a point is added to a class chart. And at the beginning of the game the class has to randomly select a Patriot’s player and use his number as the starting point. The class got Wes Welker, No. 83. 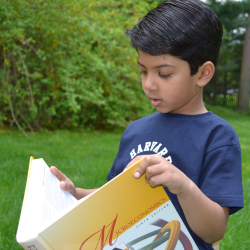 Companies play different kinds of games for different purposes - from acquiring customers to keeping them engaged. In this classroom game, I can see some aspects of a good game design. Here are my observations:

1. Make it Simple - If it takes a long time for someone to understand a game, they are less likely to play it. Simplicity is a key aspect in good game design. Players should be spending more time playing the game vs. understanding or explaining it to their friends. Maybe it is good to have a ‘kindergarten test’ for games - Can a kindergartener understand the game? Even better, can the kindergartener explain it to his/her parents?

2. Set a reasonable goal - If it is too hard, then folks lose interest mid-way and they may drop out. If it is too easy, then it is not as fun.  The game then becomes a ritual and will not get the intended benefits to the game designer.

3. Give an incentive for just starting - If you have set yourself a goal to run 10 miles and you are feeling a bit tired when you are at the 3 mile mark, you are most likely to bear the pain and run the full distance. Same principle applies to sunk costs. The game players are most likely to continue the game if they are given some ‘sign up’ points for just signing up to play the game. This will give the participants a sense of being already in the game and slightly push them to go further. The ‘sign up’ points should be reasonable. Not too high, not too low. (Its good the class got Welker and not Brady !!!)

As a matter of fact, this is what happened when I was writing the article - I started the article before the BIG game on Sunday. And obviously after the game I was not in a mood revisit the article. But since I’d already started it and had written couple of paragraphs, I wanted to finish it. So I came back to finish it.

4. Make it topical - It is good to associate the game with a popular/timely topic. As many games are temporal, it is better to associate with the current topic or brand of the time. Game players are motivated by associations and also there will be more signups for the game.

5. Set a time limit - Games are temporal. They should be time bound. The time limit depends on the game. In the example mentioned above, the game is based on a semester. An internal ‘sales game’ by a company’s sales department can be based on a quarter. Many games designed for retail customers are based on days (or some times hours). Setting the right time limit will give a sense of urgency and hence more sign ups.

6. Make it group oriented - In the ‘game’ mentioned above, individual students do not get credit for the points they score. The points they earn go towards the class. This works well when all of the participants are on the same side of the team. For example if a development team is jointly trying to achieve a zero-bug state or a non-profit group is marching towards a special fundraising target, or as a group people are trying to lose weight. Though individuals don’t get credited with points, the team spirit in this setup will motivate every team member to perform well. In a subtle way in increases the competitiveness of the team by removing the competition amongst the individuals. (This kind of technique may not work well in a setting where the participants don’t know each other or where the participants are not tied by a common goal).

At one point of time in our startup (admit it – all of you have come through this phase), we were spending too much time in meetings. And we soon realized the meetings were not adding much value to us. So we designed a 100 point game that goes like this – if we set up a 1 hr meeting and we were able to get through the meeting in 50 mins, we add the 10 mins saved towards the 100 point goal (if we go over the meeting limit, the extra time will be subtracted from the point). Once we reached 100 points we'd go and have a beer as a group. We wanted an instant gratification system, so we developed an app to instantly highlight us the value of our time. (Thinking back, its good to have the beer game also in place.)

There have been many articles written on how companies use gamification in marketing their products. The intention of this article is not to talk about product gamification. It is to discuss how startups can use some elements of intelligent game design in their day-to-day activities – either to become more productive or to motivate a team or to meet any of their internal goals.

Now it is your turn. As a startup what kind of games would you play?  Have you tried any games in your team?

14 Reasons Why You Need To Start A Startup
getting started November 15, 2010
This post has been ruminating with me for a while. It's not a sudden "a-ha" moment that made it form, but a collective group of "a-has!" over the past few months. Consider this the…
Read Post
8 Tips For Building An Internet Company Outside of San Francisco
guest March 3, 2011
The following is a guest post by Healy Jones.  Healy is head of marketing at OfficeDrop, a digital filing system and scanner software provider – and moved to Boston from San…
Read Post
Subscribe