The following is a guest post from John Greathouse. John is an entrepreneur and investor.  He currently blogs at Infochachkie where he provides practical startup advice.

You may not realize it, but your adVenture's Core Team, the senior executives who make the key decisions which drive the company's strategic direction, is akin to a primitive tribe.

Primitive tribes and your startup both entail a small number of people banded together to battle an uncaring, hostile world. Like the tribe, your company's survival is always in question and never guaranteed. Success depends upon everyone pulling together for the common good and striving to accomplish common goals. Everyone's efforts must initially focus on survival 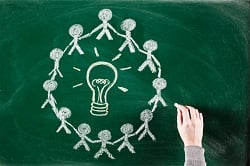 before the tribe can prosper and eventually evolve into a thriving, self-sustaining community.

Tribes are effective societal structures, as evidenced by man's ascension to the top of the food chain. Understanding the tribal organizational structure is vital to gaining an appreciation of the various roles played by your Core Team.

In partnership with Docstoc, I created the following video, in which I discuss the various roles in a tribal startup. You can watch the embedded video below or at YouTube: http://youtu.be/o_nEUIPS60U

Tribes and startups thrive when labor is efficiently divided. Long before Meyers met Briggs, people in tribal communities migrated to those roles which best suited their personalities, proclivities and skills. The key roles in tribes and startups are identical: Hunter, Skinner, Shaman, Chief and Tribal Elder.

The Hunter provides for the tribe and literally brings home the bacon. These individuals are highly autonomous, independent and thrive on frequent recognition. When they have a successful hunt, they want everyone to know about it.

The Hunter is generally not a visionary. However, once they are pointed in the right direction, they are clever enough to improvise a tactical plan to achieve a strategic objective. They do not want to be told how to take the hill, just which hill needs to be taken.

At your adVenture, the hunter is the rainmaker, in the form of a Business Development Executive, VP of Sales or Corporate Development Officer. Once they are told the type of deal that is needed, they are capable of autonomously devising the appropriate tactics to get the deal done.

A typical Hunter's characteristics include:

The Skinner makes the Hunter look good. When the Hunter brings back the kill, it is the Skinner who dresses the meat, tans the hides and preserves whatever is not initially eaten for the tribe to subsist upon during lean times.

The Skinner at your adVenture will likely take the form of the VP of Operations, VP of Professional Services or Chief Operating Officer. They ensure that your company delivers on the Hunters' promises by exceeding your partners' and customers' expectations.

A typical Skinner's characteristics include:

Shamans invent new tools and processes that improve the overall quality of life within the tribe. For instance, the Shaman will spend his days thinking of a better fishhook, a new tool for cleaning skins or searching for new medicinal plants to cure the tribe's ailments.

At your adVenture, the Shaman is often the Founder. They may also take the form of Chief Technical Officer, VP of Engineering or VP of Product. By whatever name, the Shaman is the person who devises and develops the innovations upon which your business is based.

A typical Shaman's characteristics include:

Every tribe needs a Chief, just like every adVenture needs a CEO. The Chief defines and communicates the tribe's strategic direction, such as a new valley to forage or a mountain retreat to escape the heat of summer. The Chief listens to the opinions of the other tribal members, makes decisions that impact everyone and ensures an adequate level of acceptance of such decisions to facilitate their ultimate success.

A typical Chief's characteristics include:

One of the best CEOs I worked with exhibited nearly all of the above characteristics. As a Hunter, I was frequently frustrated, as he was often slow to act. In his effort to keep harmony within the Core Team, he seemingly agreed with everyone, even people who held diametrically opposed opinions.

In retrospect, I now realize that his ability to sincerely empathize with everyone's respective positions, especially on difficult issues, was imperative in keeping our Core Team together during the numerous challenges we encountered on our road to a successful exit.

One of his favorite sayings infuriated me at the time, but I now appreciate its underlying wisdom, Some of the best decisions I ever made were the decisions I never made. Despite my Hunter-driven frustration at his hesitancy, more often than not, his resistance to making a snap decision proved to be prudent.

Tribal Elders spend their time sitting by the fire dozing and recounting the tribe's history. They cannot be counted on to do any heavy lifting nor are they in a position to execute the day-to-day tasks necessary for the tribe to thrive. However, they occasionally offer bits of sage advice that allow the tribe to avoid hardships and reap windfalls. As such, the wise Chief knows when to solicit their counsel and when to allow sleeping Elders to lie, as described more fully in Free Advice.

At your adVenture, the Tribal Elders are represented by your Board of Directors and Advisors. The Board Members likely have a varied and broad business history upon which to draw. They may be able to provide general guidance at certain pivotal points during your adVenture's journey. However, as noted in Your VC Is Not John Lennon, do not heed their advice blindly, as it is impossible for them to have your level of insight into the operational details of your adVenture.

Question: Which Tribal member is the most important?

Answer: All of them.

Without the Hunter, the Shaman's ideas would never be put into practice. Likewise, without the Skinner, much of the Hunter's efforts would be wasted. He might be able to feed himself, but he would not be able to sustain the tribe on his own.

Without the Shaman, neither the Hunter nor the Skinner would have the tools necessary to carry out their respective roles within the tribe. Without the Chief, the tribe would wander aimlessly, fighting among itself until the group eventually dispersed and the individual members were melded with other tribes with healthier cultures and a more focused sense of direction.

Balance is the key to a successful team. Thus, every member of your adVenture's Core Team is the most important member. Your Core Team is your startup's most important asset. Respect man's evolution and heed the tribal lessons of old. If you do, you may just end up on top of your industry's food chain.

So, what kind of tribal member are you? What types are you looking to hire and add to your tribe next?

8 Tips For Building An Internet Company Outside of San Francisco
guest March 3, 2011
The following is a guest post by Healy Jones.  Healy is head of marketing at OfficeDrop, a digital filing system and scanner software provider – and moved to Boston from San…
Read Post
Don't Make Raising Angel Funding Your Plan B
guest April 16, 2012
The following is a guest post by Chris Sheehan. Chris is a seed stage VC and angel investor at CommonAngels. You can follow him on Twitter at @c_sheehan and his blog Early Stage…
Read Post
Subscribe