Every company has ideas that come up (sometimes frequently).  And, based on the stage of the startup and the degree to which the idea is unconventional, there are always good, rational reasons why the given idea can't possibly work.  There are also bad, irrational reasons too.  The problem is, it's hard to tell the difference. 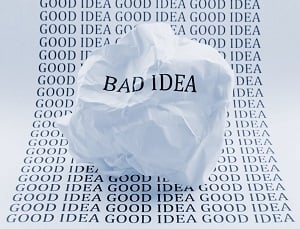 Here are some of common reasons why something won't work:

1) We've debated this several times before and have decided it wouldn't work.

4) It's not appropriate for our industry.

6) Our investors/board would never agree to it.

7) It might work, but we can't afford the risk that it won't.  (Note: When someone says “it might work…but…” they're almost always thinking: It won't work)

8) Our team/plan/pitch-deck is not really setup for that.

9) We could try it, but it's a distraction.  (Note: This often means “I've already decided it's not going to work, but I can tell I need to convince you we shouldn't try it…”)

There are many, many more reasons why any given idea won't work, but the above are a sufficient sample for this article. Oh, and by the way, I have at various points in time made all of these very same arguments myself (“I have met the enemy” and all that)

Now, here are a couple of mental exercises to try when you or you or your team is stuck.

Exercise #1: What if I told you that it's working really, really well for XYZ Company?  How do you think they made it work?

The idea here is to assume the idea is good and has worked for a company very similar to yours.  Then, ask yourself (or your team):  Now that we know it worked for them, what do we think they did to make it work?

What this does is mentally nudge you to think about how to work through whatever the obvious limitations to the idea already are.

Example: I know that nobody in our industry uses a freemium model because the infrastructure/support costs are just too high.  But, we just learned that XYZ Company is launching a free version.  What do we think they did to make it work?

Exercise #2: What if we had the proverbial gun held to our heads and we had to do [x]?

The idea here is to assume/accept that the decision to implement the idea has already been made — presumably by some higher authority.  Now, assuming that, what would you do to make the best of it?

Note:  In neither case am I suggesting that you mislead your team (or yourself, in case you're like me and have conversations with yourself late at night).  These are meant to be mental exercises, just to help drive discussion and analysis.  Though I'll confess, there is a small part of me that wonders what would happen if one did make the hypothetical seem real (at least for a short period of time).

What do you think?  Any mental tricks or tactics you've used (or thought of using) to help break-through conventional thinking?

Top 7 Reasons You Won't Vote This Article Up
reddit October 7, 2006
Most of my articles at OnStartups get posted to one or more of the popular social book-marking websites (Digg, Reddit, etc.) by one of the regular readers.  A large part of the reason…
Read Post
Startups: 10 Things MBA Schools Won't Teach You
strategy July 8, 2009
Now that 3 years have passed since I got my graduate degree (and the founding of my current startup), I think I can make fun of it a bit.  [Note: Only a moderate amount of harm was…
Read Post
Subscribe