15 years ago today, on June 9, 2006, HubSpot was “officially” started. I say “officially”, because unofficially, I had been noodling on the idea of HubSpot for a couple of years with my co-founder, Brian Halligan while we were both classmates in grad school. I picked the June 9th date, because that’s the official date that I graduated and was no longer a student. (Brian graduated a year ahead of me, and I was still working on my thesis).

I don’t have a lot of photos from the early years, because as it turns out, neither one of us are big “photo people”. But, here’s one of us celebrating HubSpot’s 2nd birthday. 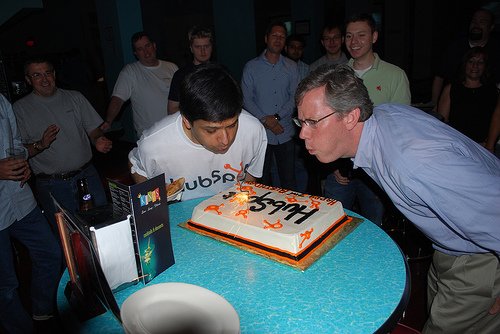 In the past 15 years we’ve had a bunch of fun and learned a ton (rhyming unintended, I’m proud of myself for resisting the temptation to try and turn that into a poem). The company has grown significantly from the two founders (and a house plant named Duo) to a globally distributed company with 4,000+ employees that’s publicly traded on the New York Stock Exchange with a market cap north of $20 billion.

I thought I’d share some of the lessons learned.

Note: These are in no particular order, because I wasn’t sure what sort key to use.

Phew!  Once I got into flow, the thoughts flowed more easily.  I’ve got more in my head, but will save that for another time. I believe in “release early, release often”.

How A 17-Year-Old In India Bootstrapped To $7M In Revenue
guest November 8, 2012
The following is a guest post written bySanket Nadhani. He previously headed Marketing and Sales at FusionCharts and just launched an eBook on the complete journey of the company on…
Read Post
Happy Birthday HubSpot! 9 Lessons From Our First 9 Years
June 9, 2015
9 years ago today, on June 9th 2006, HubSpot was officially started. I remember the day, because it was also the day I graduated.  (I had promised myself I'd enjoy my 2 years in grad…
Read Post
Subscribe