Happy Birthday BASIC, Thanks For Making Me Possible

This month marks the 50th anniversary of the invention of the BASIC (Beginners All-Purpose Symbolic Instruction Code) computer language.

I have fond memories of BASIC -- without it, my life may have turned out very differently.

I went to highschool in a small town in India (Bilimora).  It was the mid 1980s  There were no computers at my school.  Best I knew, there were no personal computers in the entire town. 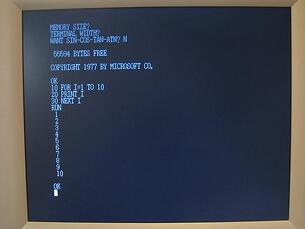 Then, I went to mechanical engineering school in a larger town (Surat).  They had PCs.  6 of them, if I recall correctly.  In a "computer lab".  It was open only a few hours a day, because the room had to be air-conditioned, and air-conditioning was expensive.  In the 2 years that I was there I didn't get to touch any of those 6 computers.  At the time, that wasn't a super-big deal, but I really didn't know what I was missing.

Then, I came to the U.S. to visit my parents in the summer.  They were living in Michigan City, Indiana at the time.  There was a satellite campus of Purdue University out there.  Folks had told me that since I enjoyed math so much, I should check out "this computer stuff".  Purdue had a short "Intro to Computers" class which I decided to take.

Thankfully, getting access to computers was trivial at Purdue (this is the early 90s).  And, that was a good thing, because the first time I worked on a computer, it was love at first sight.  I knew, just knew that this is what I wanted to do.  It just clicked.

That first day, I read both of the manuals that came with every PC -- front-to-back, in one sitting.  The MS-DOS manual and the GW-BASIC manual.  (This was not a particularly impressive feat, as those were quick reads).  Wrote my first (super-simple) programs in BASIC -- but I was hooked.  I had found my calling.

So, even though I had planned to go back to India to finissh my engineering undergrad degree, instead I stayed in the U.S. and enrolled in their computer science program at Purdue.  I would ultimately finish my computer science degree at the University of Alabama in Birmingham.

Oh, and I worked with a LOT of programming languages and development platforms over the years.  DBase IV, Framework, TurboPascal (which was awesome), Easel, ColdFusion, COBOL, C, C++ and C# -- and eventually, the languages I use mostly today:  Python and PHP.

But, fact is, if it hadn't been that random exposure to computers and access to the BASIC language, I may have never been a programmer.  If I hadn't been a programmer, I likely would never have started a software business.  Never started a second software business.  And never started the company I'm working on now (HubSpot), which has grown to 800 people and is doing pretty well.

So, Happy Birthday BASIC, and Thanks!

Why PHP Is Fun and Easy But Python Is Marriage Material
development October 27, 2010
I think a lot about choices and decisions at startups.  That is the life of a software entrerpreneur:  It’s a stready stream of hard work, occasionally punctuated by some really hard…
Read Post
Happy Birthday HubSpot! 9 Lessons From Our First 9 Years
June 9, 2015
9 years ago today, on June 9th 2006, HubSpot was officially started. I remember the day, because it was also the day I graduated.  (I had promised myself I'd enjoy my 2 years in grad…
Read Post
Subscribe