FlashTags: A Simple Hack For Conveying Context Without Confusion

The following was originally written as a post on the internal HubSpot wiki a couple of years ago. At the request of several fellow entrepreneurs (hi, Wade from Zapier!) I've mentioned this to, I'm sharing it publicly for the first time. Hope you find it useful. -Dharmesh

For easy reference, you can access this page using FlashTags.org (it redirects here).

One of the things I struggle with is clearly conveying to someone how strongly I feel about something. This is sometimes referred to as "Hill Dying Status" (i.e. do I feel so strongly about this that it's a hill I'm willing to die on).  By the way, not sure who originally used that phrase but I think it was Brian Halligan or maybe JD Sherman. Doesn't matter.

Situations like the following happen for me multiple times a day (chances are, they happen to you too):

So, I now share with you my not-so-secret hack to quickly communicate important context (either in a conversation or in an email thread). I've been using this for a while, and thought you mind find it useful as well.

How To Use A #FlashTag To Quickly Communicate Hill Dying Status

It's even easier than Sunday morning (which I've always found to be a poor benchmark):  All you have to do is include one of the flashtags below in an email, Slack or even in a conversation. That's it.

The tags are in ascending order of escalation (starting with the “I don’t feel strongly at all” to the “I really, really feel strongly").

#fyi -- Had this thought/idea/article/video/whatever pass through my brain.  I haven't spent a lot of time thinking about it. You can read it or not. Act on it or not. No response needed or expected.

Hill Dying Status (am I willing to die on this hill): I don't even see a hill.

#suggestion -- Here's something I would do if I were you. But, I'm not you -- and you own this, so your call.  Just consider it and weigh it against other things you're considering. I won't be offended if you go another way. A quick reaction/response would be appreciated (so I can learn what kinds of suggestions are useful/valuable), but is not necessary.

Hill Dying Status: I saw the hill, but didn't feel strongly enough to commit the calories to climb it.

Hill Dying Status: I climbed the hill.  I breathed deeply I contemplated my life. I walked back down.

#plea -- We don't like issuing edicts or directives at HubSpot. But...please, please, please just do this. Trust works both ways, and I need you to trust me on this.  If you still feel compelled to resist, something’s not right, let's chat. Maybe even in (gasp!) person.

Hill Dying Status: Dying on a hill is not on my bucket list, but if it were this would be a really good candidate.
---
That's it.  With just a few extra characters in that email or Slack, you can quickly convey how strongly you feel about something. Use it if you find it useful. It's just a #suggestion.

p.s. Why did I call it a #FlashTag? Because it's about communicating something in a flash (and flash rhymes with hash). And yes, I asked GrowthBot for "words that rhyme with hash".

Oh, and in case you need to find this article again or tell somebody about it, just use FlashTags.org (it redirects to this page). 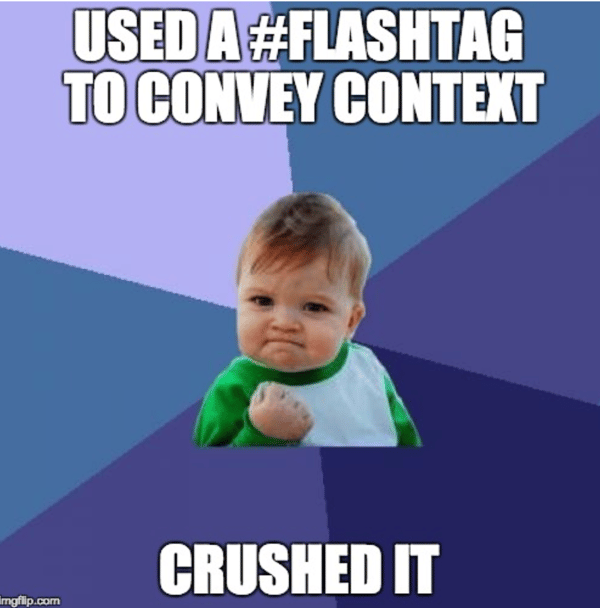 SaaS 101: 7 Simple Lessons From Inside HubSpot
strategy July 19, 2010
It’s been a little over 4 years since I officially launched my internet marketing software company, HubSpot.  (The “official” date is June 9th, 2006 — for those that are curious about…
Read Post
The @Dharmesh Test: 16 Questions For Better SaaS Companies
survey December 16, 2010
The Dharmesh Test is a quick, simple set of yes/no questions to gauge the likelihood of long-term success of a SaaS (Software as a Service) company.  It is inspired by the highly…
Read Post
Subscribe