5 Mistakes Every Startup Founder SHOULD Make

Much digital ink has been spilled trying to caution startup entrepreneurs against making mistakes. Type "mistakes entrepreneurs make" into Google and you'll find thousands of articles, sternly forewarning against the most prevalent pitfalls and errors that stand between you and your startup's success. 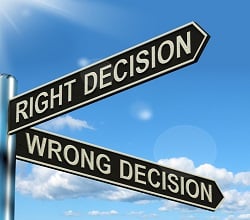 Then why try so desperately to avoid them? Call me contrarian, but I'd argue that well-positioned mistakes can be quite worthwhile, and should even be encouraged.

So here's an initial list of mistakes that you SHOULD make as a startup founder. Mistakes that are bound to happen anyway. Mistakes you will learn so much from that you'd best make them as early in your entrepreneurial journey as possible. I've also included some recommendations about what to do after you make each mistake.

It's inevitable. Someone - your partner, co-founder, employee, investor, or any other character in your unfolding plot - will mess you over. Someone will break your trust, violate a verbal or even written agreement, cut your compensation, or try to steal your equity or destroy your whole company (or all of the above, if you're me). Someone will do something stupid to scuttle your grand plan.

Accept the inevitable, steady yourself now for the oncoming blow, and just hope it doesn't hurt too much or cause too much damage. A startup is usually an odd mix of people (idea people, tech people, investors and others) thrown together by fate and circumstance in pursuit of a distant, moving target. As clearly as you think you see that target and the path and steps toward it, somebody else will see that path differently or may have a different set of scruples or incentives. That will create friction, and depending on the power balance between everyone involved, can result in someone - maybe you - getting screwed.

Post-Mistake Action: You're thinking, "Why is getting screwed my 'mistake?' I didn't do anything wrong." Look in the mirror. Upon reflection, you'll likely find that what enabled your misfortune was something you did or didn't do. The screwer-screwee relationship requires at least two people, and there are two sides to every story. Even if you clearly weren't "at fault" - you encountered a terrible, crooked person who did you in - you still need to ask yourself how you allowed yourself to do business with that person. Was the person's action foreseeable? Did you do your due diligence on your partner/employee/investor? What did you do or not do that exposed you? As George W. Bush famously said: "Fool me once, shame on you. Fool me twice… shame on…. we can't get fooled again!" (cue The Who). Having been burned once, you'll be much more careful in the future about compromising your principles or allowing yourself to do business with people who may take advantage of you later on.

This is an adjunct to the above mistake. Once bitten, your natural impulse may be to bite back. You've lost something - tangible, emotional, some future upside or all of the above - and you want to deny the perpetrator those same things or at least the satisfaction of having caused you that loss. You've been wronged, and your reflexive urge is to right the wrong by wronging back.

Go ahead, try it once. I predict that not only won't you be successful, but most likely nothing will happen at all, or worse, it will bounce back at you. If you got screwed, that probably indicates you don't have the leverage, power or ability to exact meaningful revenge anyway. You'll just feel immature, cheap and dirty and the lingering recollection of that bad feeling probably will be enough to prevent you from playing the revenge card again.

Post-Mistake Action: Look forward, not back. The objective of the startup game is to win, and two losses don't equal a win. Rather than dwell on the past, "Revenge it Forward." Your best revenge is going to be your own success. Use what happened to you as an additional driving force, a motivator to prove to yourself, the person who messed you over, and the world, that not only do you deserve better, but that you can achieve better.

3. Tell People Your Venture is in "Stealth Mode"

It's natural to want to keep your cards close to your vest. Perhaps you're afraid someone will steal your idea, or you lack confidence that you've developed it well enough to convincingly describe it to others. The tech industry has even provided you the gift of a cool-sounding cover: "Stealth Mode," which makes you sound more like a covert spy shrouded in secrecy than an unsure rookie plagued by insecurity.

Saying you're in "Stealth Mode" is almost certainly a mistake, for many reasons. First of all it can easily be interpreted as either pompousness or insecurity, which is bad for your credibility. You're also signaling that you don't trust that person, creating a negative feeling that will likely persist even after you're able to elaborate later on. Most importantly, though, you are missing out on potentially invaluable opportunities to use your own network to shape, develop and advance your product or venture. Every person you know, meet or speak with can be a key to your venture's ultimate success.

Post-Mistake Action: Switch to "Get Out There" Mode. You never know who may be a potential customer or investor for your awesome new product, or more likely, who may know someone who could be a customer or investor. There are ways to plant the seeds of curiosity, to scout out a territory, to indicate what market you are targeting, without giving away the store. As Steve Blank advocates, it's critical for the founder to "get out of the building" (physically or virtually) as early as possible, and to start getting feedback from live people very early on and keep iterating based on feedback. By keeping everything a closely-guarded state secret, you are squandering opportunities to connect with people who might ultimately help you achieve Product/Market Fit, partner with you or invest in your venture. Come up with a "teaser" line that tells people enough about what you're working on and who you're targeting to pique their interest, generate confirmation of market problems and pain points, and generate future interest or relevant contacts.

When I founded EverMinder I was happy to discuss it with just about anyone long before it was fully developed. I got great feedback that led me to our first three angel investors, all via referral, all before we launched.

4. Believe that "If You Build It They Will Come"

The problem with the movie "Field of Dreams" is that it planted the phrase "If you build it, they will come" firmly into the common parlance and specifically, into the heads of countless, impressionable startup founders. The popularity of the phrase (and its confirmation in the movie, when Costner builds "it" and "they" magically come) leads some founders to believe, and predict to investors, that they, too, need only to build their amazing new thingy, and the users will come running until the rest looks like a hockey stick.

The problem is that as opposed to ghostly baseball players in Hollywood movies, I can assure you that if you just build "it", "they" will almost certainly not come. In startup theory the "coming" of "they" is called "Market Pull" which almost never happens by itself, even among early adopters. Market Pull needs to follow an intense and iterative period of product design, customer development, Product/Market Fit and hands-on "Technology Push" into the target market, which only if successful begets the glorious Market Pull. You'll have to work hard to make the market notice and care, and probably personally engage your early users individually, and that's fine. If you've hit Product/Market Fit squarely, "they" will eventually come, but only after you've very actively recruited and engaged your early adopters.

Post-Mistake Action: Stop believing stupid movies. If you've quoted "if you build it they will come" then you don't understand enough about Technology Push and Market Pull, customer development, and developing your Minimum Desirable Product. Instead of watching movies, read. A lot. You need to learn about these concepts by immersing yourself in the writings of Steve Blank, Sean Ellis, Andrew Chen, this very blog, and the other great proponents of effective product and customer development, and get up to speed fast.

(Ok, if you're still looking to be inspired by a movie, then watch The Pursuit of Happyness. Listening to voices in a cornfield will get you nowhere. Perseverance in the face of adversity, hustle, understanding and caring passionately about your product and customers, and relentlessly pursuing your goals will give you a shot to win.)

This mistake is probably my favorite because, like the Sheryl Crow song, it's complicated. It's the mistake I continue to commit most frequently.

My favorite founder mistake is not appropriately balancing confidence and humility. There's a yin/yang relationship between the two and as you pilot your rocketship forward, you will occasionally find that you’ve leaned too hard to one side or the other.

As a startup founder you need to have a healthy dose of self-confidence. Ok, maybe an unhealthy dose. An overdose. You need to passionately believe that your solution is The Next Big Thing. But overconfidence can be extremely dangerous, for many reasons. It can be misinterpreted by others as arrogance, which can cause damaging interpersonal consequences. If overconfidence morphs into false confidence, It can cloud your vision or your analysis. A great founder must have just as healthy a dose of humility, an understanding of his or her relatively small place in the world. But being too humble can hold you and your venture back….

(Five bucks says that's the first time Sheryl Crow and a Talmudic sage were mentioned together.)

Post-Mistake Action: Unfortunately I don't have a clear "post-mistake" recipe for this one. Managing your self-confidence and humility is a push-and-pull balance exercise that you have to keep performing, every day. It's up to you to gauge each circumstances and determine which reminder note applies.

Now that I'm an early-stage investor, I meet with entrepreneurs eager to convince me that they (and their ventures) are awesome. That's great. But I don't want entrepreneurs to sugar-coat their backgrounds. I expect and want them to tell me about their mistakes and failures. I want to hear what they've learned (and also that they've made those mistakes already on someone else's nickel, not mine). A good entrepreneur wants to talk about their mistakes as well as their successes, and a good investor wants to hear about those mistake and lessons without penalizing the pitch.

It's cliché, but nobody's perfect. You're not perfect. Mistakes will happen, and you will make your share. Expect them, embrace them, and analyze them, as those mistakes and the lessons learned will become important, lasting building blocks in your personal development and the development of your company.

So get out there, make some mistakes, learn from them…. And win.

This was a guest post by Ben Wiener (@BeninJLM). Ben is a startup founder and is Managing Partner of Jumpspeed Ventures, a Jerusalem-based micro-fund that invests in early-stage startups.

The Magical Founding Team Mix For Web Startups
sales August 16, 2010
At a startup dinner I had with a bunch of really smart software entrepreneurs in Austin, Texas during SXSW earlier this year, something really struck me.  Of the 8 founders at the…
Read Post
The Most Important Thing to Do Before Building Your Startup
#StartupAdvice June 3, 2014
We failed. After 6 months poring over the code quality and refining the design of our mobile app, my partner and I finally launched it in the app store and the downloads started…
Read Post
Subscribe