The First Rule Of Disruption

Working on a startup?  Have a 800 pound gorilla you're trying to disrupt?  That's awesome.  But here's a tip:  Don't talk about disrupting them.

The first rule of disruption is: You do not talk about disruption.

Why is this so important?  Why shouldn't you declare to the world (and the tech press) that you're going after the big kahuna?  Doesn't the media love a great David and Goliath story?

There are my reasons.  I'm going to keep this simple: 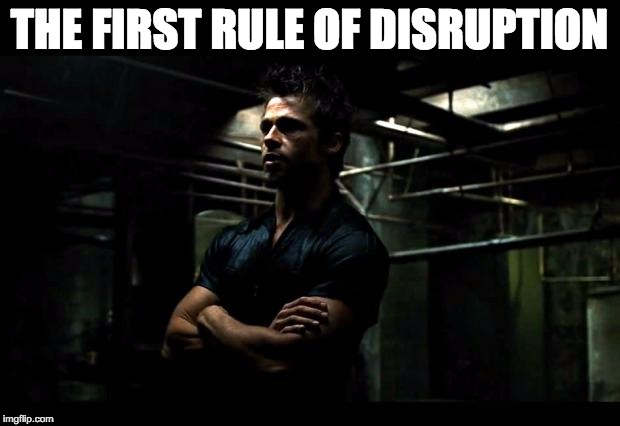 1. In just about all cases, to successfully disrupt a large incumbent, your best case scenario is that they completely ignore you and what you're doing.  This allows you to (quietly) build the thing you need to build without too much intervention.

Here's the script:  "Don't mind us, we're just over here working on something tiny.  We're not worth your time. You're much better off focusing on your best customers and driving your profit margins up."  (This is pretty much the story that plays out in Clayton Christensen's "Innovator's Dilemma", which if you haven't read, stop what you're doing and do that right now).

2. You want the incumbent to act "rationally", because an emotionally fired-up incumbent will come try to crush you simply out of spite and ego.  They may not succeed  in crushing you -- but in the process, they can certainly cause a lot of pain.  And, responding to their actions will distract you from that whole disrupting thing you're trying to do.

3. One of the keys to disruption -- which usually happens from below is that your product/offering has to be inferior in some critical way.  The fact that what you have doesn't meet the needs of the existing customer-base is what makes it easier for the incumbent to ignore you.  If you start talking about how you're going to disrupt -- you're probably going to wind up trying to convince the world why your product is not really inferior but even better for customers than the existing, leading alternative.  That sounds like a good thing -- but it's not, because you shouldn't, in the beginning, be trying to create something that's "better" than what exists.  Chances are, if you do that, you'll do something incremental and you take the incumbent on, on their home turf.  Turns out, they're really good at playing that game (there's a good chance they invented the game).  You should be working on something dramatically simpler, cheaper or lighter.

Don't start out trying to build something better for the entrenched company's existing customers.  That's not your goal -- your goal is to create something "good enough" for customers the incumbent doesn't care that much about.  If their best customers wouldn't laugh at the ludicrous lack of capability in what you're building -- you're probably doing disruption wrong.  Go back and read Innovator's Dilemma (again).

OK, so when should you talk about this awesome disrupting you're doing?

Ideally, in the past tense:  Think:  "We've disrupted...", not "we are disrupting".  Next best choice?  When the path is clear and the outcome is more or less inevitable.

Until then, be heads-down and quietly just do the work.