9 Reassuring Qualities Of The Truly Confident

Confidence is quiet: It’s a natural expression of ability, expertise, and self-regard.

I’m fortunate to know a number of truly confident people. Many work with me at HubSpot, others are fellow founders of their own startups some of whom I've met through my angel investment activity. But the majority are people I’ve met through my career and who work in a variety of industries and professions.

It comes as no surprise they all share a number of qualities:

Cocky and conceited people tend to take a position and then proclaim, bluster, and totally disregard differing opinions or points of view. They know they’re right – and they want (actually they need) you to know it too.

Their behavior isn’t a sign of confidence, though; it’s the hallmark of an intellectual bully.

Truly confident people don’t mind being proven wrong. They feel finding out what is right is a lot more important than being right. And when they’re wrong, they’re secure enough to back down graciously.

2. They listen ten times more than they speak.

Bragging is a mask for insecurity. Truly confident people are quiet and unassuming. They already know what they think; they want to know what you think.

So they ask open-ended questions that give other people the freedom to be thoughtful and introspective: They ask what you do, how you do it, what you like about it, what you learned from it… and what they should do if they find themselves in a similar situation.

Truly confident people realize they know a lot, but they wish they knew more… and they know the only way to learn more is to listen more.

3. They duck the spotlight so it shines on others.

4. They freely ask for help.

Many people feel asking for help is a sign of weakness; implicit in the request is a lack of knowledge, skill, or experience.

Saying, “Can you help me?” shows tremendous respect for that individual’s expertise and judgment. Otherwise you wouldn't ask.

Many people feel they have to wait: To be promoted, to be hired, to be selected, to be chosen... like the old Hollywood cliché, to somehow be discovered.

Truly confident people know that access is almost universal. They can connect with almost anyone through social media. (Everyone you know knows someone you should know.) They know they can attract their own funding, create their own products, build their own relationships and networks, choose their own path – they can choose to follow whatever course they wish.

And very quietly, without calling attention to themselves, they go out and do it.

6. They don't put down other people.

Generally speaking, the people who like to gossip, who like to speak badly of others, do so because they hope by comparison to make themselves look better.

7. They aren’t afraid to look silly…

Running around in your underwear is certainly taking it to extremes… but when you’re truly confident, you don’t mind occasionally being in a situation where you aren't at your best.

(And oddly enough, people tend to respect you more when you do – not less.)

That’s why truly confident people admit their mistakes. They dine out on their screw-ups. They don’t mind serving as a cautionary tale. They don’t mind being a source of laughter – for others and for themselves.

When you’re truly confident, you don’t mind occasionally “looking bad.” You realize that that when you’re genuine and unpretentious, people don’t laugh at you.

They laugh with you.

9. They only seek approval from the people who really matter.

You say you have 10k Twitter followers? Swell. 20k Facebook friends? Cool. A professional and social network of hundreds or even thousands? That’s great.

But that also pales in comparison to earning the trust and respect of the few people in your life that truly matter.

When we earn their trust and respect, no matter where we go or what we try, we do it with true confidence – because we know the people who truly matter the most are truly behind us.

So, what do you think?  Are there qualities of truly confident people that I've missed?  Would love to read your thoughts in the comments.

Note: The original version of this article was published as part of my participation in theLinkedIn Influencers program.  The article was very well received. It got 1.1 million views and has generated 4,000 comments.  This is v2 of the article with some minor edits. -Dharmesh

The Long Shadow Of The Valley Reaches Berlin 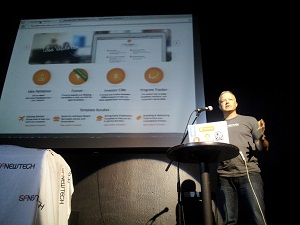 How I Hacked The Startup Launch Conference Circuit