"He who sleeps on the floor will not fall off the bed." ~Robert Gronock

"I quit my job today," announced my husband, Seth Rosen, as he casually dropped his briefcase and strolled through the front door of our apartment. As if it was no big deal. As if quitting one's job is a routine occurrence. To be fair, Seth had talked about leaving his day job to work full time with his best friend, Mike Salguero, on CustomMade.com, a website they had recently purchased. And, to be fair, Seth had asked me repeatedly how I felt about the move. I had assured him that, in no uncertain terms, he had my unequivocal support -- mostly because I didn't think he would actually do it. Yet, here I was, staring at my newly-minted entrepreneur, unsure of whether I should throw up my arms to hug him or strangle him. After all, lots of people talk about starting a company because they think they have a million dollar idea, but very few pull the proverbial trigger. There is a reason for that. Leaving a seemingly safe and reliable salary for the uncertainty and potential perils of a startup company is risky. More startups fail than succeed, especially if a business requires venture capital. A quick search on Wikipedia told me that there are around two million new businesses started in the United States every year, of which less than 800 receive venture financing or 0.04%. CustomMade was already doomed. To make matters worse, it was the summer of 2009 and the US economy was in a deep recession. Was he nuts? 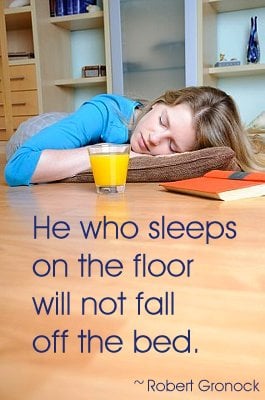 Contrary to popular belief, Seth and Mike argued that the height of the Great Recession was an opportune time to start a company. In 2009, talented people were being laid off and investors were looking for better deals. Companies like Disney, Hewlett-Packard, and Microsoft provided ample precedent that great companies were born during hard economic times. Seth also convinced me that the timing was perfect for a young, well-educated couple with no children and decades of future earning potential to make the leap. Still, trading a plump six-figure salary (and health insurance, as my mother would rightly later point out) for an emaciated startup seemed irrational and incredibly risky to, well, everybody else.

"How could you let him jeopardize your financial security?" was the universal cry from friends, family and colleagues. Others probed deeper:

"When will Seth start to earn a salary?"

"How will you pay your rent?"

"Will you have to put off having a baby?"

"What does CustomMade do again?"

"What if you lose everything?"

"Wait, what do you mean you can't afford to come to my wedding?"

I was standing in front of a firing squad, dodging the bullets as best I could. Over time it became exhausting and my confidence in Seth and CustomMade began to erode.

One afternoon I called Seth at work and told him to be home for dinner, that I was going to cook. He agreed to leave work early only after I told him that chicken parmigiana was on the menu. This was code -- my notoriously limited culinary repertoire consists of any protein that can be breaded and pan fried, and microwave popcorn. If home-style chicken parmigiana is on the dinner menu, then something is up in the Rosen house.

The minute Seth stepped through the door my anxiety erupted. "Why are we starting a company now?" I asked. "It seems like too big of a risk."

"Well, it depends on how you define risk," Seth said without skipping a beat. He sat down at the kitchen table and poured himself a glass of wine. "How do you define risk?" His knowing look should have tipped me off that this question required more analysis than my first impression. But the answer seemed obvious. Without thinking I responded that "risk" is the chance that something bad will happen.

Seth shook his head. "Risk is not just about avoiding bad outcomes. It is the chance of an unexpected outcome good or bad."

The implication was clear. If he continued as an investment banker, then he could not build CustomMade, attempt to change the way people consume retail goods, and reach for a successful exit. Every day he spent doing the "secure" job was a day he couldn't spend building a company.

"Although it seems counterintuitive at first, staying at my day job offers very limited upside financially and professionally. I think that's actually the riskier path."

I paused and slowly digested his words. He was right. From the beginning I had been viewing CustomMade through a much different lens. And so had many other people in our lives.

This is why the Robert Gronock quote above is so relevant for entrepreneurs and their families. Your interpretation reveals how you define risk. In the years before I married Seth, my life was predictable. As a child, my parents taught me to sit up straight, brush and floss my teeth twice a day, and to always color inside the lines. After high school I followed the safe path from college to law school to the conventional confines of a big Boston law firm that provided me with a reliable paycheck. In those days, after reading Gronock's quote, I would have thought, "Wicked smart!" and promptly traded my injury-prone four-poster bed for a mattress on the floor.

But a funny thing happened after I married an entrepreneur. Seth taught me to think differently about the world. The Gronock quote is not sage advice to avoid a bad outcome; it's about a trade-off. By sleeping on the floor you are eliminating a good outcome (a blissful night of sleep) in order to mitigate the chance of a bad outcome (falling off the bed and suffering an injury). Thinking about entrepreneurship in terms of trade-offs and opportunity costs is a better way to think about the associated risks.

Based on my discussions with Seth, this analytical framework is the same whether the decision is to start the company or a day-to-day operational matter. In either case, you need to consider your priorities, which are shaped, at least in part, by the opinions of your inner circle. Of course, multiple third-party opinions often complicate matters. This is especially true if you have a spouse like me that Monday morning quarterbacks your decisions. Let me give you an example.

Seth's company, CustomMade.com, runs an online marketplace for custom goods and services. They connect their network of makers with consumers who are looking for a durable good (like furniture, jewelry or clothing) to be made custom. In the beginning, I was adamant that the company should do capacity building like how-to-run-a-business workshops and other educational programs for their makers, who range from solo practitioners to large, multi-employee businesses. My thought was that adding extra programs would knit the CustomMade community together. It felt good to make the suggestion, like I was adding value to our company.

But he never acted on it. Not even after I nagged him for the fifth time.

"Listen, it's a good idea. But I have a small team here, and everyone needs to be focused on building the product to make our engines run. If I focus my people on maker workshops, then that takes them away from our core priorities and I risk slowing down product development. See the trade-off?"

Oh, right. He was referring to the opportunity costs of his employees' time. I immediately shut up about capacity building, and since then I've tried to keep my backseat driver tendencies to a minimum. When I do provide feedback (solicited and otherwise), I try to frame it in terms of trade-offs. I've even applied the framework to our relationship, but with mixed results. Admittedly, it's hard to stop and consider trade-offs and opportunity costs when you are inherently impulsive, as I am. Unlike me, however, Seth always takes his time to carefully weigh all options before making a decision.

But perhaps I should take comfort from that fact. At least I know we'll never be sleeping on the floor.

Stealth Mode, Schmealth Mode: The Real Reasons Why Startups Don't Talk
strategy May 12, 2006
Being stealthy is not usually healthy and not a great way for you to get wealthy. If you hang around startup founders long enough, you’ll ultimately come across someone that…
Read Post
8 Tips For Building An Internet Company Outside of San Francisco
guest March 3, 2011
The following is a guest post by Healy Jones.  Healy is head of marketing at OfficeDrop, a digital filing system and scanner software provider – and moved to Boston from San…
Read Post
Subscribe