Be Captain Of Your Destiny - Not Prisoner Of Wishful Thinking

It's hard to will a business into being. Anyone who doesn't understand this through intuition figures it out soon enough through experience.

To win, an entrepreneur needs the conviction to overcome inertia. People have gotten along just fine without whatever it is you hope to sell them. Fact is your early attempts to convince them otherwise will almost always fail, which means you need the tenacity to keep swinging until you connect with the market.

George Bernard Shaw famously observed that the reasonable man adapts to his circumstance, that only an unreasonable man would seek to adapt the outside world to his own needs. Progress depends on the unreasonable man, said Mr. Shaw. It's a quote I've always loved. It means that apparent failure is just another obstacle to be overcome by an individual with the will, and the character, to do so.

That's an attractive idea to an entrepreneur. But sometimes that attraction is fatal. 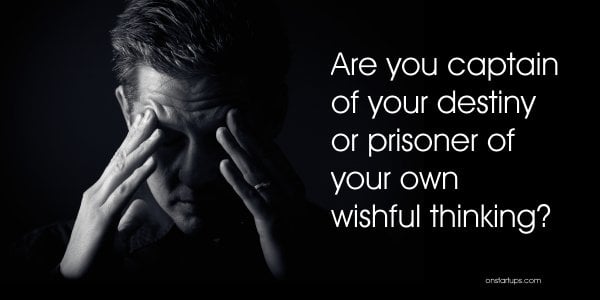 For every story of conviction overcoming a perceptual speed-bump, there are 10 of an entrepreneur who hung on too long after the point where the market responded with a resounding, “Meh.” The stronger your sales skills, the longer you'll tend to hold out past the “point of meh,” and the higher your opportunity costs will be versus investing in an offering with the potential to be pulled by the marketplace rather than pushed by the brute force of your sales and marketing prowess.

So how do you know? How do you tell the difference between a light at the end of the tunnel, and the oncoming train of market indifference?

Here are 5 questions that can help:

2. Do your customers understand your offering differently than your prospects? The world has a learning curve, and dealing with it is part of the entrepreneurial adventure. But does the perception of the people who've climbed that curve — your existing customers — really change in important ways from that of your further-out prospects? If the answer is no, you're seeing something your customer doesn't. And that usually means it doesn't exist.

3. Are others finding success in your space? This one is simple. Is someone in your space kicking butt? If so the competitive threat may be important, but so is the validation that you're chasing something which can be caught.

4. Will the larger context change in some way to smooth your path to success? m-Qube was the 800-lb gorilla in a non-existent industry for years before the US text messaging phenomenon took off. We kept our powder dry, and waited it out. Are you doing the same? If so agree on a tangible trigger and conserve your cash until you hit it. If not consider giving the money back, and changing over to a game you can actually win.

5. Is the source of your conviction what you need, or what actually is? I love Shark Tank, and in almost every episode some amateur tells the sharks that their idea will take off because they need it to. Cuban and Kevin typically bow out soon after that. The reason? Entrepreneurs motivated by an objective opportunity have a much better hit rate than those motivated by an internal psychosis, or an external requirement.

This last one breaks my heart, and I see it a lot. I get that you hate to disappoint your uncle Nunzio, or that you promised your spouse you'd make it work this time. But the fact is those things are irrelevant to the question of whether your idea will fly, and anyone willing to point that out to you is someone you can trust over the long run.

Don't be that person, folks. So much of the pain in life, over time, is caused by distance from the truth. And the same is true in business.

Ask these questions of yourself, and try hard to answer them honestly. If the news is bad and you deal with it like an adult, I promise you'll live to fight another day. If the same is true but you're a good enough salesperson to sell yourself eventually you're going to hit somebody else's wall, and create collateral damage you might otherwise have avoided.

There's a fine line between being the captain of your destiny, and the prisoner of your own wishful thinking. Use these questions to help sort out which side of it you're on, and please share what you learn with the rest of us here.

Startup Culture: 23 Insights From The NetFlix Culture Deck
April 19, 2010
If you have time to read one document on the topic of startup culture, you should read through the NetFlix “culture deck”.  If you have time for two, read through the NetFlix deck…
Read Post
6 Tips To Rapidly Raise Funding on Angel List
August 1, 2012
The following is a guest post by Rick Perreault. Rick is co-founder & CEO of Unbounce, a Vancouver-based company that develops a web based platform which makes it easy for…
Read Post
Subscribe