The following is a guest post from Karen Rubin.  Karen is a product manager at my company, HubSpot.  I asked her to write this article sharing some of our "playbook" around launching new applications.  She loves getting new twitter followers: @karenrubin

Today, HubSpot announced the launch of a new tool called Marketing Grader. Like our other Graders, Marketing Grader is a free application.  It asks you to enter a website URL and returns a comprehensive report on your marketing efforts.

The team has been building Marketing Grader for a number of months, and it is our most ambitious free tool since Website Grader debuted in 2006. The team knew it was important not just to build an awesome product, but to get the message out there, and to do it right. These are the tips and guidelines we followed to keep the launch on track. 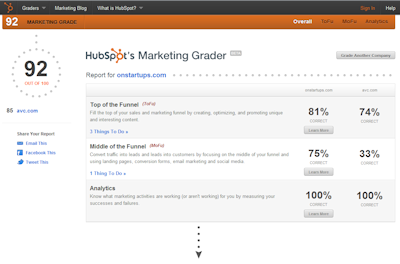 Like many startups, one thing we never lack at HubSpot is ideas. As the team started brainstorming the launch campaign, there was talk of many different approaches we could take to announce the new tool. We could write a series of Top 10 lists or reveal the Top 100 Marketers. We could create personalized videos á la the Old Spice Man. We could somehow involve the HubSpot unicorn.  The list of possibilities was endless (as it often is in a good brainstorming session.) We spent a couple of weeks tossing ideas around and trying to figure out which would make the biggest splash and launch the tool to the most fan fare.

But a couple of weeks into the planning, we realized that the main message we wanted to get out, namely, that HubSpot was launching an AWESOME new tool to grade your entire marketing funnel, was getting lost in all the other cool things. Top 10 lists go really well with Marketing Grader (since the tool can be used to build and analyze such lists).  But were people just going to remember that we were doing new lists? Or that those lists were backed by a super cool new tool called Marketing Grader?

We decided to take a step back and regrouped around the idea that the launch of Marketing Grader was the real message, and that we needed to simplify in order to effectively communicate that message -- especially in the first month. It doesn’t mean we won’t try our other ideas (some of which are a bit crazy) in the future, it just means this month everything we do is laser focused on our top message.

Once we focused on our message, we had to think about what tools we were going to use to get the message out there. Some were easy; we’d use the blog, our email list and the other Graders to drive people to Marketing Grader. Others needed some more thought.

For social media, we could tweet about the new tool and post its launch to Facebook, but we thought that this wasn’t enough to get the message out there. So we put a plan in place that included personalized tweets to influencers as well as previous users of the Grader tools. We are also planning to participate in multiple Twitter chats, a new mechanism we have recently started experimenting with.

When planning a campaign, it also helps to think of people as tools (we mean that in the nicest way possible.) We came up with a list of bloggers and journalists with whom members of our team have relationships.  We then identified the best people to reach out to them personally, introduce them to the new tool, and answer any of their questions. We also planned ways to get our customers and partners involved with using and sharing the tool.

It Takes An Entire Company To Um, Raise Launch A Product

Lastly, we realized it wasn’t enough for just the few of us working on the tool to promote it during its launch; we needed to get the entire company on board. We sat down with the marketing team and brainstormed ways to get everyone involved. This includes writing special blogs posts (like this one), creating infographics, running competitions for our partners, integrating the message with other campaigns and making related videos to promote the tool. By including the company in the campaign, people thought of new and innovative ways to get the message out and implemented these ideas on their own.

We trained our consulting, support, and sales teams on the tool so they can start using it with customers and prospects. We also came up with a sales contest to encourage the sales team to share the tool with as many of their leads in their funnel as possible. The day of the launch, we sent an email to the entire company reminding them of the launch and giving them some lazy tweets to share with their networks.  For the twitter rookies out there, a "lazy tweet" is when you provide a sample tweet, fully written, so that someone who is inclined to help you, but a tad lazy/busy, doesn't have to think.  They can just copy/paste the tweet or retweet an existing tweet.  The easier you make it to help you, the more people do.

Launching a new tool like Marketing Grader takes blood, sweat, and tears, but the result is a tool that you’re so proud of, you want the whole world to see. That result makes the process of properly launching your new tool all the more important. we wanted to give Marketing Grader every opportunity to get out there to the public and be a rocking success. Staying focused, using all your tools and resources, and leveraging the skills of everyone in your company are great ways to get your new tool the publicity it deserves.

Here are answers to some questions we think you might have.

Why the big hoopla over the launch this time?  Usually, HubSpot trickles out grader tools with an inocculous tweet from Dharmesh.

You're right.  In the past, we've been much more subtle and measured when we launch a new grader product.  This is largely because our new grader tools are often a crazy experiment -- we're not sure whether the market actually wants it or not.  By avoiding a big launch, we avoid a big "unlaunch".  In the case of Marketing Grader, we've had lots of evidence from our customers and friends (who have tried the tool) that it is super useful.  We've made a big investment in this app, and we wanted to match it with some marketing.  And, like all things at HubSpot, this is an experiment too.  We wanted to see if we could reach people beyond our co-founder Dharmesh's twitter followers (which admittedly, is over 100,000 now).

How did you build your media contact list?  What tool did you use to manage it?  We try to keep things simple at HubSpot.  Our media contact list is a simple Google Spreadsheet.  The people on the list are a combination of folks that we know individually and someone on the team has some relationship with.  Now that we've got another twitter celebrity (Laura Fitton, aka @pistachio) who happens to know just about everyone, our VIP list was bigger and better than ever.

Why use Marketing.Grader.com on its own domain?  Wouldn't the SEO have been better to put it on HubSpot.com?  We basically had three choices when picking domain names for our free tools.  We could use HubSpot.com -- which has advantages, including brand-building and SEO.  By launching on HubSpot.com, the Marketing Grader page would get some SEO authority relatively quickly because of the power of the main domain.  Another option would be to put it on a completely separate domain, like MarketingGrader.com.  But the option we picked is to use Marketing.Grader.com (so, make it a subdomain of grader.com).  This approach has a couple of advantages.  Getting a sub-domain of an established main domain to start ranking is much, much easier than a completely new domain.  And, since we use this model for our other free tools, our users are already used to it.  (But, of course, either domain will work -- one simply redirects to the other).

What's the difference between getting all of these efforts to happen on the same day?  Couldn't you have easily just "spread them out" over time and gotten he same level of overall usage?  This is a tricky one.  For the most part, you are right.  Rather than have 20 things happen all on the same day (which is a challenge to orchestrate) we could have spread the news out over days and weeks.  The advantage to trying to "compress" some of the news into a smaller window is that there's the potential for the news to hit a "tipping point".  If news of the launch hits several different channels, all around the same time, it gets "noticed" by other channels that we didn't have direct access to.  Those people then might write about it, causing more people to see it.  We get a snowball effect.  Doesn't always happen, but it's much more likely that it will happen if we can get some strong media pickup all on the same day.

It's not fair!  You folks have a reach of millions.  How can my tiny little startup match that?  It's a good point.  We do have exceptional reach, across many different channels. That makes our jobs much, much easier.  It's fun to be able to put something new out there and know that it's going to get some attention.  Our advice to you would be two-fold:  You don't have to have a massive reach to get attention.  (We had some great successes even when we were a struggling young startup).  The key is to be remarkable and even more importantly, create useful content.  For example, if this article were written like a standard marketing schpiel, it would never have gotten posted to OnStartups (despite the fact that Dharmesh is one of our founders).  By wrapping the "nugget of news" in a nice, useful layer of tips, tricks and lessons learned, the article becomes something people (hopefully) want to read.  Maybe even share.

Does Karen Rubin actually exist or did Dharmesh just conjure up an attractive, charismatic persona as part of some weird A/B test he's running?  Attractive and charming?  Oh, Internet reader, you flatter me so (batting eyes in best impersonation of Scarlett O'Hara).  But rest-assured, I do actually exist.  What you don't know for sure is what parts of this article were part of my original submission, and what parts are late-night edits from our crazy co-founder.  I'll leave that as an exercise for the reader.

So, what questions do you have?  What can we tell you about the HubSpot marketing machine and how we do things?  What lessons have you learned launching your own apps?

Startup Marketing ABCs
marketing June 9, 2010
The following is a guest post from Mike Volpe, the VP of Marketing at HubSpot, who has helped grow our marketing software company from a handful of customers to nearly 3,000 customers…
Read Post
Startup Insights From The Grateful Dead
book August 3, 2010
The following is a guest post by Brian Halligan, my co-founder at HubSpot.  Brian recently released a new book titled “Marketing Lessons From The Grateful Dead”. The book is a…
Read Post
Subscribe