37signals Losing Lustre? Why I Miss The Adoring Fans

Written By: Dharmesh Shah August 24, 2007
37signals Losing Lustre? Why I Miss The Adoring Fans Written by Dharmesh Shah on August 24, 2007
For some reason, when I woke up this morning, my non-caffeinated brain (had not had my morning coffee yet) began to wonder why I hadn't heard much lately about the smart folks over at 37signals.

For most of 2006, I couldn't help but trip over mentions of 37signals.  It seemed that the press and media couldn't get enough of them.  They got mentions in lots of major publications, written up about extensively on the blogosphere (including mentions here on OnStartups.com).

I thought this buzz around 37signals was a great thing for startups, because unlike a lot of Web 2.0 companies, 37signals was a real business.  They wrote software that people liked and were willing to pay for.  I thought they were a ray of shining hope in the dark dungeons of Web 2.0 "we'll make money with advertising someday" hell.  [Note:  I have nothing against advertising-subsidized software, it's just that it seems there's a limit to how many startups can actually succeed with that model].

So, when the previously mentioned glimmer of thought struck me, I thought I'd look a little deeper and determine whether it was just me that had changed (i.e. was I subconsciously not looking for them as much as before) or had the hype and hysteria settled down a bit.  Since there are limited ways to figure this out, and I was not feeling particularly energetic, I thought I'd just use Alexa.  Though many characterize Alexa as "grossly inaccurate",  it was enough to satisfy my curiosity on this point.

Here's the Alexa chart of the 37signals traffic (page views) since inception.  As you'll see, the "spike" was clearly in late 2006 and things have gone downhill from there -- relatively precipitously.  [Note to self:  Try not to use words like precipitously without morning coffee, that exercise hurt my brain]. 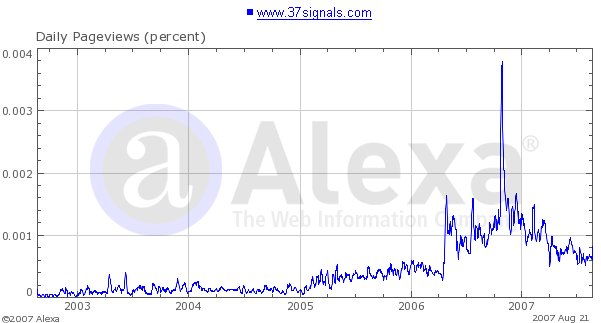 So, what does this really mean?  For the 37signals folks, I'm guessing not all that much.  I'm sure they still have a great business, lots of adoring customers, etc.  I discontinued their service a while ago (the software's "less is more" approach wasn't really doing it for me), but my guess is I was precisely the kind of customer they didn't want in order to stay true to their vision.  So, chances are, they're still doing quite well.

The question is this:  Without the hype and hysteria in the media about the company, are they finding it more difficult to find new customers?  Did all that free press and PR have an appreciable impact on their business -- and did the loss of it hurt?  Or, was the PR useful at the time to build some critical momentum and they're just fine now.  I don't know.  Perhaps one of you does.

In the meantime, my continued best wishes to Jason and the rest of the 37signals team.  I miss those halcyon days when their pragmatic "get things done" approach stood in stark contrast to a lot of the misguided thinking that was out there at the time.

37signals: Feature Bloat vs. Business Bloat
June 22, 2006
As a quick overview, 37signals is a small web software company that creates a series of simple applications for project management and collaboration. Those that follow 37signals (the…
Read Post
Disagreeing with 37signals #1: Less Is Sometimes Less
April 19, 2006
This is the first in a series of articles I plan to write about some of my thoughts on 37signals and their e-book “Getting Real”.  [For the record, I highly recommend the book].  Most…
Read Post
Subscribe