Why I Wish My Competitors Well And You Should Too

When I started my first company, I didn’t start with a grand mission.  The idea behind the business wasn’t transformational.  It wasn’t going to change the world.  Historians weren’t going to write about it after I was dead.  And all of that was OK.  Even though there was no grand mission — I was solving a problem and meeting a market need that I cared about.  Wait, let me clarify that a bit.  I cared in the sense that if I didn’t solve it, I was restless.  I couldn’t let it go.  I wasn’t satisfied with the way the problems in that industry were being solved and the solutions that other companies were offering.  That’s what drove me for 10+ years with that startup. 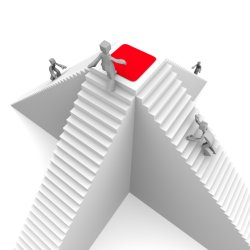 It wasn’t until much later (well after I had sold that first company), that I gave the topic some additional thought.  How do you know whether or not you care about the problem you’re working on?  Here’s my litmus test:

2.  Answer yes/no:  If the problem was somehow magically “solved” (to your satisfaction), but you weren’t the one that solved it, would you be fine with it?

Let me clarify by shifting back to my story:  In the niche market I was working in, the problem I was working on was relatively small.  But, if one day, I woke up and learned that somehow the problem was magically solved — even if it was by a competitor, I would have been fine.  A little miffed that they had beaten me, but still OK.  As long as they really solved it.  I could have stopped toiling away the sleepless nights working on that particular problem and I would have found other problems to work on.  The concept here is:  You care enough about a problem that you don’t necessarily mind if someone else solves it.  What really frustrates us entrepreneurs is when competitors win, but they don’t actually solve the problem.

One way to explain this concept better is to look at an extreme example.  Lets say the problem you were working on was curing cancer.  Of course, you’d be passionate about finding a cure.  You’d be working hard.  It’s an important problem, and it’s not surprising that you care.  Now, imagine if you woke up one day to learn that someone else had created a cure.  You’d be glad that the problem was solved — even though it wasn’t you that solved it.  Sure, it would have been great to get the fame and glory, but that surely wouldn’t cause you to wish the other scientists/researchers/doctors ill.  Nope.  You’d wish them well.  Why?  Because fundamentally, you care about having the problem solved.

Now, with my current startup, HubSpot, I’m still passionate.  But the problem happens to be much, much bigger.  This time it’s transformational.  This time it’s a mission.  I’m working furiously on this startup too.  I co-authored a book, “Inbound Marketing” on the topic.  I’m doing a fair amount of public speaking (despite the stress it causes me).  I believe we’re on the path of truth and justice (we’re helping small businesses grow and reducing junk mail, spam, and marketing calls that interrupt you at dinner).  We’re hoping to be the ones that end up transforming the marketing industry.  But, if someone else ends up doing it, and winds up delivering on our mission, well, then, more power to them.

I care enough about the problem that I don’t mind if someone else solves it.  That’s why I truly wish my competitors well.

But, just because I wish them well doesn’t mean I’m going to make it easy for those competitors.  After all, like you, I’m an entrepreneur and as such, I’m fiercely competitive.

Summary:  When possible, work on really big problems.  They’re more fun, and it’s easier to get excited.  But, even if you’re not working on a really big problem, it’s OK, as long as you at least care enough about the problem you are solving that you don’t care who solves it.  You just want it solved.

9 Quick Tips Learned While Raising $33 Million In Venture Capital
venture capital February 8, 2010
As the market improves, my guess is that many of you will likely be thinking about raising funding for your company.  With my latest startup, I’m now a venture-backed startup founder…
Read Post
The Classy Way To Get Media Coverage For Your Startup
guest October 30, 2012
The following is a guest blog post by Nicholas Holmes. Nicholas is the co-founder of MediaGraph, a public relations platform that enables small businesses to manage their own media…
Read Post
Subscribe