This article is a bit out of the ordinary.  But, it's a Frid 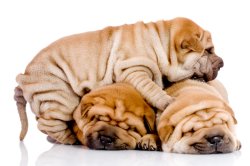 ay so I'm hoping you'll cut me some slack.

For some reason, I like wordsmithing and trying to make phrases smaller (but still have some meaning).   So, late at night, I tried to come up with some of my best startup advice and see if I could reduce it down to exactly three words (which is why I call them "triplets").  One thing led to another, and I became obsessed with it. So, then I made 47 before I had to make myself stop.  And, to ensure that you didn't take this too seriously, I included a photo of some puppies.  You will now find the article irresistible and will share it with the entire world.

In any case, hope you enjoy them.  It's likely not the most brilliant startup advice you've ever read -- but it has a decent chance of being the shortest.  Oh, and please be sure to add your own in the comments.

Update:  Guy Kawasaki (yes, the Guy Kawasaki) was kind enough to post some of his own triplets. Here are some:

Challenge:  You're way smarter than I am.  Please come up with your own startup triplets and share them.  Leave a comment or post it to twitter (with hashtag #StartupTriplets).  I think you'll find it fun -- and addicting.  I'll take the best ones and pull them together into a future post -- or even a book.  You could be famous!

How To Watch A Startup Presentation
startups August 7, 2006
This article is in response to an excellent article Paul Graham posted recently titled “How To Present To Investors”.  If you are the founder of an early-stage startup and expect to…
Read Post
Building A Startup Marketing Plan: Tips In 3 Words
marketing September 9, 2010
The following is a guest post by Ilya Mirman. Ilya has spent the past decade running marketing for software vendors including SolidWorks, Interactive Supercomputing (acquired by…
Read Post
Subscribe