13 Ways To Pull Off A Killer Demo Day Presentation

There are over a hundred seed accelerators in the world and many more are popping up every year. In New York City, there are going to be 6 more this summer on top of TechStars NYC. The common thread amongst all of these programs is what is now known as "Demo Day", which is a single day (sometimes days) where a number of investors are put in to a room to watch all of the participating companies present for 6-8 minutes. Recently, my company OnSwipe was a part of the inaugural Demo Day in NYC for TechStars. Everyone has been asking me how we prepared and put together our demo day presentation. Without further adieu, here's how. You may want to watch the recording of my presentation below first: Actual Presentation

You should not have the audience focused on your slides, but your words during the presentation. Bullets are an absolute no-no throughout the presentation. My presentation had one sentence at most per slide with an accent color highlighting what was a really important word for the audience to understand. The slides should set the tone for what you are currently talking about to keep everyone on track. Stay away from transitions or overly flashy slides. They were cool when you were in junior high, but don't add a lot when talking to a large crowd.
Onswipe Techstars Demo Day 2011 (Deck Modified)
Slide Deck (some things might be out of place due to 2 animations)

The worst thing you will ever do is look back at the screen. This makes you seem unprepared, especially during demos. It also makes everyone think you didn't prepare with the person, usually your cofounder, that is controlling the slides. You don't want to look down at it too much, but it's there in case shit happens. In a split second you could be on the wrong slide or miss a beat. Instead of turning around to look back confused at the screen, you can properly pause and guide the presentation back to order while looking ahead. It's a small subtle, yet useful prop. Make sure it's there.

I practiced religiously before going on stage. Dave Tisch and Dave Cohen probably wanted to murder me when I skipped the public pitch practices with all the teams, but I was secretly practicing at home or late at night. I look at a presentation a lot like product. It just needs to be broken and tweaked a lot. It isnt' ready for public consumption or scrutiny until you've fine tuned it enough. Make sure you practice until no end. It's what makes you comfortable and confident.

This might just be my style, but you need to be bold...very bold. You are going to be presenting with 10+ other companies or even more that day. Investors and press get antsy very fast. When was the last time you could sit through 5 hours of pitches easily? By being bold, you can give a great refreshing jolt to the crowd and pique their interest. It's also great to stand out with a ton of press in the crowd as they will want to do an interview with you afterwards. "Be so good they cannot ignore you."

People love to tweet live events and demo days are no different. Inside of the room, you will have a great group of influential people that can send your message out to the right people. The thing is, they can't send out the entire presentation, they can only send out 140 characters at a time. In our case, we had 3 tweetable soundbites that became well known afterwards. These weren't by happenstance, but planned well in advance:

@TechStars NYC Demo Day, OnSwipe CEO: "Apps are Bullsh*t." [most tweeted QOTD?]less than a minute ago via web

Btw, the code phrase for the afterparty bouncer is "tap my rocketship"less than a minute ago via Twitter for iPhone

The best way to do a demo day type presentation is to put the entire delivery into three different acts. Entrepreneurship and delivering a presentation is absolutely no different than theater. You should look at your delivery as a spectacle that enlightens those in the audience, not a typical slide deck pitch.

Act I - The Setup Setup the enemy for the entire presentation, the elevator pitch, and the big vision business. It should be under 90 seconds and even that is something I found difficulty with. The goal here is to give context, hook the audience in, and get to a killer demo.

Act II- The Demo This is what really matters. Too many companies approach demo day as investor day, instead of showing what they've built off in-depth. Screenshots are a no-no and sadly, pre-recorded videos seem to be the way to go due to Wifi. Show off a logical progression of what your product does. Nothing gets someone ready to write a check like a great demo.

Act III- The Execution This is where you talk about what you have accomplished and where you are going. I usually like to talk about a few things: Press, current investors, business development deals, and the team you have been able to attract. This shows where you have been and how you are able to execute as a team. You should also make sure that you talk about what's next. When are you launching? are you raising money? what is the big credo and philosophy behind the company? Tell the world why you exist and why you are going to take over the world.

Get to the demo as fast as possible

This was the biggest lesson we learned through practice. The first version of the presentation took 2:30 to get to the demo. That was an absolute eternity. Even now, I could have shortened things by a good 30 seconds or so. Make sure you get to the demo as fast as you can. The other side of it is, making sure that you give enough context to the audience.

We set out to say app store apps for content publications like the Wall Street Journal and Wired were just complete bullshit. We were very bold in this statement, but we backed it up with undeniable fact. If you are going to make an enemy, make sure you have the weapons to combat them. You have to seem sure when declaring ane enemy and have a logical argument.

Make sure the big long term vision is known

Too many investors and potential partners will think about the present since that is mostly what you are showing. Spend time talking about the big vision in terms of product and in terms of business model. Your product is often different than your business model. ie-  Google's product is search, but it really makes money through advertising. Sometimes you may not know what this big vision is, but if you do, make sure that is known. Most people thought our big vision was: be a WordPress plugin that makes things pretty. We made it clear that our goal is to power the advertising in a world where content is consumed with tablets, not point+click devices. 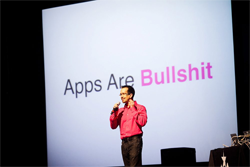 I'm an outlier here, but the pink shirt went over well. It made me hard to ignore and ended up color coordinating the presentation. Trivia: The onswipe pink colors come from that shirt, not the other way around. Make yourself memorable with appearance. People will remember your ability to command an audience and that can often be done through how you dress. Once again, demos and presentations are not pitches, but theater.

Most companies go into a demo day with an intention of raising money. It might be something direct with an exact dollar amount or it might just be an announcement that you're playing around in the waters. Either way, make sure you have an ask that lets the world know your fundraising plans. The biggest problem in entrepreneurship is the fact, that most entrepreneurs just don't ask. If you have existing fundraising commits, let the world know who is in and for how much if possible. My buddies at thinknear did this by letting the world know IA Ventures was in for 400k of a 1.2 million round.

Social proof is one of the best things that you can portray during a presentation. Do not be arrogant or cocky, but certainly be confident. Show the world who is behind you and what you have accomplished. Nothing gets an investor more excited than tangible traction, social proof from their peers, and the ability to execute.

Things that didn't work along the way

In short, this was the most important day of my life and a huge success. The only downside, is that it meant TechStars is officially over. You should apply to the program , and if you get in, hopefully this post will be of use.

Have you presented at a "Demo Day" before?  Any tips of your own that you'd like to share? 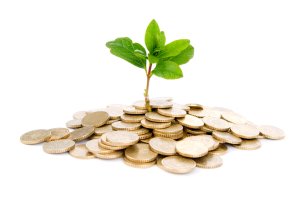 Tips For Getting Started For The Non-Technical Web Entrepreneur

To connect with me and others in the OnStartups community to ask questions and share resources, join the (free) OnStartups Community.